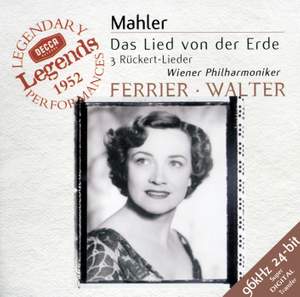 The sense of pathos is almost unbearable.

The 1952 Walter will never lose its place at the heart of any review of Das Lied recordings. Walter obtains even richer, more impassioned, more pointed playing from the Vienna Philharmonic than in 1936 in, of course, improved sound. With his disciple Ferrier as alto soloist, her songs are richly, warmly voiced, and taken, particularly in the finale, to the limits of emotional involvement.
Few have attempted to identify so completely with the work's ethos of farewell and its thoughts of eternity. Ferrier envelops one to the core of one's being. The wholly idiomatic and wonderfully expressive Patzak is the near-ideal tenor.

The latest Decca remastering of the famous (1952) Ferrier-Patzak version of Das Lied is a revelation...Ferrier's voice is warmly and vividly caught, as is the characterful Patzak.