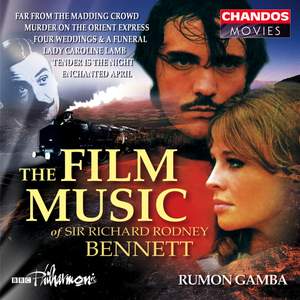 Richard Rodney Bennett possesses a natural flair for composing for both big screen or small. The concept of presenting the music in suites (no credit here for the arrangers) makes the best possible... — Gramophone Classical Music Guide, 2010 More…

Richard Rodney Bennett possesses a natural flair for composing for both big screen or small. The concept of presenting the music in suites (no credit here for the arrangers) makes the best possible case for it, circumventing the problems encountered on the original soundtracks where fragmentation sometimes marrs enjoyment.
It's a measure of his standing in the film world that all these scores were issued on disc concurrently with the film. The earliest, Far from theMadding Crowd (1967), belongs to another era sonically speaking, but on this sumptuously recorded disc you can imagine yourself back in that state-of-the-art Odeon, Marble Arch, as the curtains parted to reveal Hardy's Dorset landscape on its giant curved screen, with Bennett's wistful unaccompanied theme for flute answered by oboe on the soundtrack.
Like that film, Lady Caroline Lamb was presented on its initial run as a road-show attrac- tion, with an Overture, Entr'acte and Exit Music on the soundtrack, played respectively before the showing, during the intermission and after the film.
The Suite reveals Bennett's fondness for a lyrical line at its most impassioned, with Philip Duke's eloquent viola-playing going to the heart of the story of this aristocratic lady's doomed affair with Byron. Enchanted April moves us to the sunshine of Italy, where the colours of the percussion and ondes martenot lend a sweet fragrance to the scene. Elgar's Chanson de matin makes an unexpected but entrancing appearance.
When concentrating on the music without visual distractions it's easier to note the discreet Love Theme for Four Weddings and a Funeral.
Beginning on low flute with broken chords on the harp, it subtly underlines the weddings and the funeral where John Hannah reads Auden's poem Stop all the Clocks.
From television comes Tender is the Night –Nicole's Theme, a popular foxtrot, 20s style, representing Scott Fitzgerald's ill-fated character Nicole Diver, inspired by his wife Zelda. Period dance music plays a part, too, in Murder on theOrient Express, where Yuri Torchinsky, leader of the BBC Philharmonic, catches to a tee that sweet sound so characteristic of Oscar Grasso, leader of Victor Silvester's ballroom orchestra.
Conductor Rumon Gamba knows just how to levitate Bennett's celebrated train waltz theme, and the response of his orchestra throughout this disc suggests that they can turn their hand to the idiom of this music at the flick of a wrist.