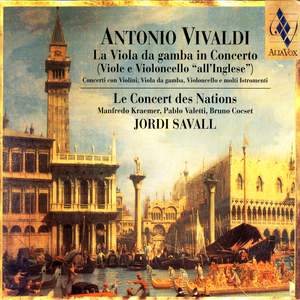 It is only recently that two seemingly unconnected names, those of Vivaldi and the viola da gamba, have been uttered in the same breath. The established, uncontested view on the matter was quite simply this: from the middle of the 17th century, the viol, which was still flourishing north of the Alps, had all but disappeared in Italy, where it had been replaced by the bass violin and, subsequently, by the cello.

Yet, among the more than 800 surviving works by Antonio Vivaldi (1678-1741), five include movements for an instrument that Vivaldi refers to variously as "viola inglese" (English viol), "viola all inglese" or "violoncello all‚inglese". Clearly, the instrument was not a member of the violin family, although for centuries musicians have performed these parts on the baritone cello. In fact, it now seems clear from recent research that the viola da gamba had not entirely disappeared in Italy: Vivaldi was introduced to the viol by his father Giovanni Battista Vivaldi (the latter being employed at the Ospedale dei mendicanti in Venice, which boasted a consort of seven viols). In addition to his violin classes, from 1704 Antonio Vivaldi also taught the "viola all’inglese" at Ospedale della Pietà. Evidence has been found of numerous instruments being loaned to the institutions of the Pietà by rich Venetians. The golden age of the viol at the Pietà therefore exactly coincided with the period during which Vivaldi composed works including this instrument, around 1720.

This album brings together all of Vivaldi's concerti containing one or several parts written expressly for the viola da gamba. Of these, three contain handwritten notes by the composer calling for the "viole all’inglese". The earliest, the Concerto in A Major RV 546, dates from 1720, giving a new lease of life to the use of this instrument; the contrast between the tones of the violin and the bass viol holds a special fascination. The Concerto Funebrein B flat major RV579, with soprano viola da gamba, lends a subtle tone to this highly expressive work. The Concerto con molti Istromenti in C major RV 555 uses two treble viols; it is an unusual work with some superb effects of instrumental colour. To these magnificent pieces are added the Concerto in F major RV 540 for violin and cello, the Concerto in B minor RV 580, with 4 violins and cello, and the Concerti in D minor and G minor, where the cello part is played by the viola da gamba.

The original autographs, which are preserved in the Turin National Library, bear witness to Vivaldi’s extraordinary inventiveness in the combination of timbres and the development of the concertante and virtuoso language, which ranges from the elegiac Concerto Funebre to the dazzling Concerto per molti Istromenti.