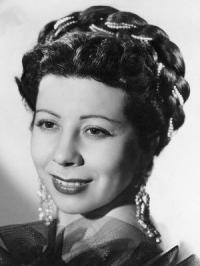 Giulietta Simionato was born in Forlì, northern Italy, in 1910 and studied in Rovigno and Padua before making her professional debut aged just 18 (as Maddalena in Rigoletto) following the death of a domineering mother who had forbidden her to pursue a singing career. Despite attracting the attention of the conductor Tullio Serafin in an early singing competition, Simionato’s career was relatively slow to ignite – though she had no shortage of engagements throughout 1930s, most of them were comprimario roles, and it was only after the Second World War that she came to international attention for her commanding performances of bel canto repertoire in particular. She frequently sang and recorded opposite Maria Callas during the 1950s (their collaborations included Norma/Adalgisa, Aida/Amneris, and Anna/Giovanna in Donizetti’s Anna Bolena), whom she famously slapped for tickling her during a rehearsal in 1955 (the argument was patched up and the pair continued to work together amicably). In addition to her signature roles in bel canto, her wide repertoire also included Santuzza, Eboli, Carmen, Charlotte in Massenet’s Werther.

Simionato remained extremely active as a teacher and musical ambassador well into her nineties; she died in 2010, just a week before her hundredth birthday.

Find out more at https://en.wikipedia.org/wiki/Giulietta_Simionato