Often a composer’s late works in any particular genre show a distinct development from his earlier ones in terms of style, technical demands and musical profundity (Beethoven’s String Quartets and Schubert’s Piano Sonatas being two of the most obvious examples). Mozart showed a similar development in his symphonies, and it is the last four (Nos. 38-41) composed between 1786 and 1788 that display the most significant departure from his earlier style.

Part of the reason for this stylistic change is the general development seen in his compositions throughout his life. This is particularly acute in the case of the symphonies as he wrote the vast majority of them when he was very young (we wrote No. 30 at the age of 18 in 1774) and for various reasons he wrote very few symphonies after that.

Equally important though is the change that took place in the ‘function’ of the symphony in European musical life during the 1770s and 80s. You think of religious music being written in response to demand for a particular setting on a particular day, but it is easy to forget that much other music also had a certain function in mind when it was conceived. In the case of Mozart’s early symphonies (written up to the end of his time in Salzburg – around No. 30) this was commonly for the framing of other events – for example as overtures, entr'actes or interludes in the theatre or church. Although essential to the success of those occasions they were not the main events and it was important that they did not upstage them. Their main criteria therefore were to be easily performed and easily listened to.

All this changed during the 1780s, and in the case of Mozart this was articulated by his move from provincial Salzburg to cosmopolitan Vienna during this time. His late symphonies therefore were conceived on a different scale with their performance very much centre stage. The result was generally much longer works, more complex in style and design and with more extremes between grandness and tenderness.

A new 2 CD set out next Monday (25th February) with the Scottish Chamber Orchestra under Sir Charles Mackerras captures this late Mozart style brilliantly. They are superb performances, which show off the rich variety of the music. The excellent SCO shows a remarkable ability to alternate seamlessly between passages of tenderness and beauty and those of intensity and excitement. Mackerras makes sure you hear everything you need to, with every phrase carefully shaped and intricately balanced. The moderate size of the orchestra (24 string players) means that the players can really play out without having to hold back.

In all, an enthralling and thoroughly recommended release. Even if you own these works already, you won’t have heard them like this before! 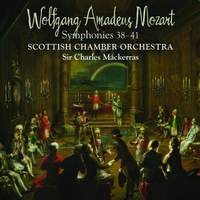