I must admit that when a colleague invited me to guess who was hitting those notorious high Fs with such bull's-eye accuracy on a new all-Mozart recording which opens with the Queen of the Night's aria, I rattled through at least half-a-dozen names before suggesting Aleksandra Kurzak - although the 'star-blazing queen' was something of a signature-role for the Polish soprano in the earlier stages of her career, in recent years she's focused more on spinto repertoire such as Puccini's Madama Butterfly and Tosca, Verdi's Elisabetta and Alice Ford, and even Mascagni's Santuzza (a role often assigned to dramatic mezzos). But Mozart Concertante (released on Aparte earlier this month) reveals that Kurzak's vocal freshness and agility remain as beguiling as ever after these excursions into heftier territory - and she also reveals an additional string to her bow in directing the conductorless Morphing Chamber Orchestra with flair and precision...

In between performances of Butterfly last month, Aleksandra spoke to me about the differing vocal demands of Mozart and Puccini, how her own training as a violinist feeds into her approach to singing and directing, why she doesn't agree that Mozart is necessarily ideal repertoire for young voices, and one particular soprano whom she reveres in this music...

You’ve just finished a run of performances as Madama Butterfly – how easy do you find it to move between that sort of repertoire and Mozart?

It’s all about the technique. When you’re singing Puccini you need to produce a rounder sound: you cover more around the passaggio, and it requires a different approach to high notes. For Mozart everything’s lighter and brighter, and from a musical point of view there’s more dialogue with the orchestra and with individual instruments.

That dialogue is one of the reasons why I absolutely love singing the music of Mozart; it’s something special that you can’t really compare with any other composer. It was such a huge joy to make this CD, and one important thing to mention is that we didn’t have a conductor – I did a bit of directing myself, but essentially we approached the recording like chamber music. Not having a conductor meant that we really had to listen to each other: it was true collaboration, and by the end of the process we were so together in every respect.

If you have musicians who really concentrate on what’s going on, then it’s honestly no problem when there’s nobody standing out in front of them. In a way I prefer it: sometimes you’ll ask a conductor for something and they’ll tell you it’s not possible because the orchestra won’t understand…And in most cases that just isn’t true: they’re professional musicians, and they have the score right there in front of them! And this particular orchestra are just wonderful – it’s a very international ensemble and the members play a lot of chamber music together, so they’re superb individual players who also know how to work with one another.

You trained as a violinist before shifting your focus to singing – did that come in handy when it came to working directly with the orchestra for this project?

Absolutely. I’m not a musician who thinks very harmonically: I’m more about the melodic line, and I think that approach worked well for this repertoire. Back when I was a violinist, sometimes I’d have to sing a line to work out what I wanted to do with it and then translate that onto the violin. I don’t do this so much any more, but at the very beginning of my singing studies I would actually make bowing gestures as I sang, especially if I was nervous – if you just shift your focus away from the mechanics of singing, then somehow everything falls into place! It makes perfect sense if you think about it, because the bow is like the breath and the support is like your right hand. Having that background as a string-player helped a lot when we were doing this recording, because it was easier to talk to the orchestra about things like phrasing and intonation: you feel like you have something to say and that you talk the same language.

Do you still play the violin for pleasure?

Not any more, though I do play the piano sometimes! I actually sold my violin after my last exam in college; I was considering trying to carry on with both, but to be a solo violinist you have to practise so many hours a day. Ultimately you have to make a choice, and singing was mine.

How do you feel about the mindset that all voices should sing Mozart, or that it’s an essential rite of passage for young artists?

I don’t agree with that at all! So many students are assigned these arias right at the start of their training, but this is music for singers who already know a lot about the art and technique of singing – it’s hard, and it needs time! Perhaps teachers set arias like ‘Deh, vieni’ and ‘Voi che sapete’ because the melodies are quite simple and the range isn’t too challenging, but it’s about so much more than that: you have to have the right musicality, and you have to care about a certain sound-quality. Mozart shows up absolutely everything, because you can’t cover around the passaggio and you can’t disguise any issues with breath-control or line: it’s really not for beginners, and in so many places you hear roles like Cherubino and Susanna not sung well at all.

Of course if you have a good technique you’ll be able to sing Mozart, but that doesn’t necessarily mean you have to do it: singing is all about finding the repertoire that suits your own vocal colour and personality, and if that doesn’t happen to be Mozart then it doesn’t mean you aren’t a good singer! Roberto [Alagna, Kurzak’s husband] is just one example. At the very beginning of his vocal training his teacher gave him a Mozart aria to study; his mother (who has nothing to do with music) knocked on the door of the bathroom where he was practising and said: ‘Something’s going wrong with your voice, you don’t sound like yourself…’. (Roberto still practises in the bathroom to this day, actually!). He told me that after two weeks of working on that aria he simply couldn’t sing any more: his high notes were no longer there, he lost the colours in the voice, and everything was just more difficult.

And that’s what can happen if you sing repertoire that’s just not in your nature. When I started my own vocal studies, I could already sing the Queen of the Night no problem – I had notes to spare, in fact, because my upper register went up to the high C above top C! But my teacher insisted I had to change my technique for some reason…I remember having real problems with Schumann Nussbaum, which felt so difficult even though it only goes up to the F at the top of the treble stave.

Ultimately you have to do what your voice tells you. I don’t believe in the fach system: I sing Queen of the Night on the recording, I sing Butterfly on stage, and even though they’re really different they’re both comfortable for me. And if we look back to the time when these operas were written, they didn’t subscribe to the fach system either: it wasn’t even seen as unusual that the same singer who sang Gilda would also sing Aida, like Teresa Stolz.

Which singers from previous generations do you particularly admire in Mozart?

My mother. She was my teacher and also sang for many years at the Kammeroper in Warsaw, which was the only opera-house in the world who staged all of Mozart’s operas. This was in the late 1980s and 90s, when they did a lot of international tours; I found a playbook recently of my mother singing Zaide at the Teatro Real in Madrid. She sang more than a thousand performances of Queen of the Night, and was truly an expert in her craft: there was such incredible beauty in her voice, and I really admired her enormously. Perhaps that’s why I hardly ever listen to other singers in Mozart, with one exception - that is of course the late Edita Gruberová, one of the most beautiful Mozart singers ever. Her concert arias and Konstanze are just incomparable…so yes, her and my mum are my main inspirations in this repertoire.

That said, I also admire singers like Mirella Freni, Renata Scotto and Montserrat Caballé, who were all more associated with later Italian repertoire; Freni, for instance, didn’t really sing a lot of Mozart, but her Susanna has so much light and sweetness. It’s a different approach from what we usually hear in this music – if you listen to her singing ‘Deh, vieni’, it’s much more Italianate, rounder and more Romantic than most Mozart singers and I like it! And I must mention Kiri Te Kanawa, who of course was the most wonderful Contessa.

How prominently does Mozart figure in your future plans?

Of the roles on the album, I’ve sung Vitellia, Fiordiligi and of course Queen of the Night on stage: in fact shortly after we made the recording, my agent called to ask if I’d like to sing the Queen again. It was a No from me: I was happy to do it on the CD, but I don’t want to go down that route of going back to roles that I sang years ago. And doing it on stage is a different thing altogether – you’re not as calm as you are in the recording-studio!

On the wishlist: maybe Konstanze, because it’s such a wonderful role. I’ve sung Blonde in Die Entführung at the Metropolitan Opera, in Chicago and in Hamburg, so I’ve been on stage with Konstanze a lot, which adds an interesting perspective! (I do regret not including Konstanze’s ‘Martern aller Arten’ on the CD, but we simply ran out of time…Perhaps we’ll just have to do another album!). But for now my heart is really with Puccini, and I have a lot of Puccini projects lined up for the coming seasons…

Might Roberto be tempted to try Mozart again with you?!

He’s still never sung Mozart on the stage: we did a concert together in Hamburg where he sang Don Ottavio’s aria, and that was his first time! It was a different world, hearing a voice like that in Mozart, but I thought ‘Wow, why not!’. Mozart wrote so many lovely duets for soprano and tenor, so maybe we’ll try some in concert in the future… 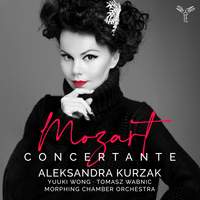