Interview,  Long Yu on The Song of the Earth

The Chinese inspiration for Mahler's Das Lied von der Erde is fairly well known; using a translation of ancient Chinese poetry, Mahler created a symphony in all but name. Although translations of the Mahler Lied into Chinese exist, until recently there has not been an original Chinese setting of the poems. This lack is addressed by a striking new work from Xiaogang Ye, commissioned by Long Yu, conductor of the Shanghai Symphony Orchestra. He pairs it - naturally enough - with the well-known Mahler work, in a diptych filled with both commonalities and contrasts.

I spoke to Long about the genesis of this work, and the musical and cultural relationships between 'East' and 'West' over the centuries.

Mahler’s symphonic Lieder cycle sets Hans Bethge’s fairly free translations-of-translations of the original Tang-era [seventh- to tenth-century CE] poetry – how much do you feel was lost, or changed, in translation?

Mahler’s German lyrics illustrated a kind of Eastern artistic conception from the perspective of Westerners, but there are still differences in terms of literal expression. Because ancient Chinese poetry is very concise, often a simple word or sentence can express a lot of content, not only narrative, but also artistic conception, giving you a lot of room for imagination. However, the characteristics of Western languages are different. There is no word like Chinese that gives you a lot of space for imagination, so Mahler's lyrics are more of a narrative of the situation, and there is a difference in artistic conception from the original text.

Western Europe has gone through periods of excited interest in other cultures – the ‘Turkish’ fad of Mozart’s time, nineteenth-century French and British tastes for Ottoman and Egyptian influences, and so on. Do you think Mahler’s interest in Chinese poetry had a similar basis?

Back then, some composers extended their curiosity and admiration to Eastern culture starting from India, so they tried to involve some Eastern elements in their music. Debussy was one of them: he used the pentatonic scale a lot which is commonly used in Chinese music. Another example is Puccini: the traditional Chinese music "Jasmin" was used in his opera Turandot. Mahler did so too; that's why he composed The Song of the Earth. Of course, they all understand the East in an indirect way, and they touch the Eastern culture in different ways in their works to express their yearning for Eastern culture.

The third movement of Song of the Earth uses the structure of Oriental melody, and the spatial feeling that the composer tries hard to create in the last chapter is the aesthetics of the composer's touch with the Oriental freehand brushwork. What I think is very interesting is that through this recording we have completed a dialogue between Mahler and real Eastern culture across time and space. Mahler’s granddaughter and the chairman of the Mahler Foundation, Marina Mahler, has also been talking about this feeling; she was very excited and felt it was very meaningful.

The notes to this album mention that you initially intended to approach Mahler's Das Lied as a philosophically Chinese work, but eventually decided to take a more German angle. What prompted you to change tack in this way – and what did it mean in practice for the way you shaped the performance?

At the beginning when I started to conduct the piece, I tried to find a Chinese feeling to fit the work before I realized that approaching it as a German text was more aligned with Mahler’s style. Although he had never been to Asia, Mahler expressed common human feelings by using Chinese elements whilst maintaining the style of German lied.

The idea of setting the original poems themselves seems natural and obvious in retrospect, but we had to wait until the early 2000s for it to actually happen. Where did you first get the idea to commission this new work from Xiaogang Ye?

Mahler’s The Song of the Earth occupies a special place in my heart. It was the piece I proposed for the program of my first major conducting job in Germany some 40 years ago with a German orchestra in Berlin. I suggested this piece because I tried to find a cultural identify and relationship between German repertoire and Chinese culture. I was very young and I didn't realize quite how difficult this piece was. I realized that it is a very difficult piece not only for Chinese artists but also for German artists as it is hard to find the relationship between the two cultures.

Not long after I first conducted the piece in Berlin I brought it to China, performing at the Beijing Music Festival as part of a tour around China. I didn’t feel that Chinese people realized the significance of this masterpiece and the history of the cultural exchange between China and Europe, even though a lot of people were talking about the fact that it is based on Chinese poems. Beijing University did some important research into what Tang poem it is originally based on. Because Mahler used a French translation of the original Chinese poem, the full beauty of the original poem is not revealed. That’s why I commissioned Xiaogang Ye to compose a Chinese version using the same original poems, and I am very proud of this. When the two works are presented in contrast you can feel the differences in philosophy, aesthetics and literature between the East and West, which gives you a deeper understanding of the composer’s intentions.

Western audiences’ knowledge of Chinese classical composers is generally quite limited, with Tan Dun perhaps the major exception. Who else would you suggest as the key voices that people should get to know?

Chen Qigang is my most respected Chinese composer. He is the most successful composer who combines Chinese music with Western composition methods. Many of his works even use ancient Chinese music, such as Three Variations on Plum Blossom. He uses modern techniques to give new life to traditional music that has been circulating in China for thousands of years. There is also Guo Wenjing who is very interesting. He has no experience of living in the West, but his music has an international vocabulary. And Tan Dun and Zhou Long are composers I admire very much. The younger generation, like Zhao Lin, are also very good.

How much of a coherent “school” of classical composition is there in contemporary China?

It is still in the exploratory stage, and school has not yet formed. Over time, I hope that Chinese music can make a strong mark in the history and stage of world music.

You mention these two works forming a “double picture” of the European and Chinese outlooks on love, pleasure and death. For you, is this juxtaposition more about highlighting commonalities, or about relishing contrasts with a sense of “vive la différence”?

It is more about contrasts. Love, pleasure and death are general feelings of humans, but people from different cultures have their unique way of expressing and feeling. The juxtaposition of these two pieces allows fruitful comparisons. Close comparisons are now possible with people able to see the double picture – how Europeans feel about love, pleasure, and death, and how the Chinese feel about the same things. In this project, you can hear that the last piece of the Mahler, ‘Der Abschied’ – ‘The Farewell’ – and the last piece in the Chinese work both express exactly the same emotion, even though each composer uses different textures. Mahler creates oil paintings, while Xiaogang Ye paints in watercolor.

So I would like to say, the feeling is common, but the way it is presented is different. We can consider this juxtaposition as a conversation between different cultures, which is very important at this moment especially after the global pandemic. Music is a good way to present this difference as it is a useful reference for people to be able to understand the difference. The difference is not right or wrong, but being aware of it helps us understand and communicate with each other. 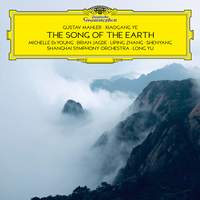 Gustav Mahler & Xiaogang Ye: The Song of the Earth