As lockdowns brought large-scale musicmaking to an end for large parts of the world in 2020, Linus Roth was among very many musicians who found themselves seeking new creative outlets. For Roth, the inspiration of dance-music was key, as a way to lift spirits in a bleak and uncertain time, and this album is the result.

Recorded in the library of a former Benedictine monastery in southwestern Germany with pianist José Gallardo, it draws together a sparkling collection of suites and encores, all based in one form or another on dance-music and displaying Roth's trademark virtuosity. I spoke to him about the selection of works on this album, and the role virtuosic writing plays in them.

Much of the repertoire you’ve recorded here consists of arrangements of larger works – the Brahms dances, often heard in their orchestral versions, and the Stravinsky Divertimento adapted from a ballet. Do you think the musical impact of lockdowns will create a renewed appreciation for “chamber” arrangements like this?

I have performed these arrangements for many years, not only since the world went into lockdown. They are wonderful gems, but I hope we will very soon be able to enjoy big symphonic orchestras on stages around the globe again.

Stravinsky’s Divertimento is described as having been written by him for the 35th anniversary of Tchaikovsky’s death. We don’t often hear much about Tchaikovsky’s impact on Stravinsky – was this tribute a commission, or a personal homage from Stravinsky?

Stravinsky’s admiration of the music of Tchaikovsky was well-known: he was a public champion of the composer. In 1928, Stravinsky was commissioned by Ida Rubinstein to compose a ballet for her company’s season which was based on music by Tchaikovsky. It was then arranged for violin and piano by Stravinsky himself and the violinist Samuel Dushkin.

You mention virtuosity as constituting the “means to an end” – but this is largely an album of flamboyant showstoppers! Do you think the pieces on this album have hidden depths, beyond the ear-catching fireworks?

Some might have, such as Szymanowski's Notturno for example or the opening of Brahms Hungarian Dance No. 4. I find all pieces on this album are special in the way that they are extremely expressive and emotional. Some could be seen as the pop music of their times, but I don't see that as a deficit.

Bazzini is known today almost entirely for the impressive Ronde des lutins, yet your notes emphasise that he was admired in his time by Schumann and Mendelssohn, and taught Puccini. How did he fall into such relative obscurity and become a “one-hit wonder” in many people’s minds?

We can only speculate, but I think by composing mainly virtuoso and music he put himself in the position of being a direct concurrent of Paganini, who was and still is way more famous than him. There are other works that show his wonderful abilities as a composer, but in the symphonic and operatic area -he did compose an opera- there were again others who made a bigger career. The Ronde des Lutins is definitely a masterpiece in the sense that it actually is „Programmmusik“ - everyone can so easily imagine little goblins dancing around when you hear it.

Since you recorded this album in late June and early July 2020, lockdowns of various kinds have been a semi-permanent feature of life in many countries. What other projects have you been pursuing during this time – musical or otherwise?

I recorded the 6 Solo Sonatas and Partitas by Johann Sebastian Bach, that I had scheduled originally for the year 2021. As most concerts were cancelled however, I decided to do it in 2020. Another album I recorded is further works by Weinberg, whose works I champion, including a world premiere of a newly discovered work. So together with the Virtuoso Dances album, I have recorded 4 CDs within 7 months. 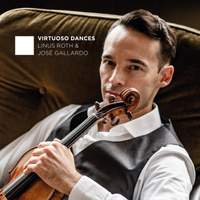