The title of Sabine Weyer's album, Mysteries, immediately evokes the esoteric philosophies that Scriabin explored throughout his life - mystically- and psychologically-inspired thinking which found expression not only in his own richly Romantic music, but in that of his contemporary Nikolai Miaskovsky. Although he studied alongside Sergei Prokofiev and the two became lifelong friends, Miaskovsky's own compositional path was drastically different. He adhered to a much more Romantic harmonic language and it is this that Weyer expertly explores, while also juxtaposing it with the living French composer Nicolas Bacri. These two contrasting perspectives, from composers almost a century apart yet clearly sharing much in common, provide for a fascinating musical journey full of the "passion and wildness" that critics have noted in Weyer's playing.

I spoke to Sabine about the works she's chosen for this dual-faceted album, and the influences that shaped both Miaskovsky and Bacri.

All the sonatas you’re performing here are single-movement ones, rather than being formally subdivided. Why do you think this particular approach to the sonata is so popular with some composers (Bacri and Miaskovsky, but also Medtner among others)?

I think that Bacri, like Miaskovsky before him, is a composer for whom the density and intensity of the expression are important. Bacri says himself that these sonatas aim to have, in only 12-13 minutes, the same hyper-expressive density of a half-hour sonata in a traditional form. I think that the goal is really to condense the music as much as possible without losing anything of the richness that can be found in larger works.

Miaskovsky quotes the Dies irae plainchant in the Sonata No. 2 – a melody used by Berlioz, Liszt, Rachmaninov and many others for various different purposes. What do you think its significance was for Miaskovsky?

Dies Irae means "Day of wrath", and I think that this alone explains a lot about Miaskovsky’s motivations to include it in his piano sonata: the plainchant describes the Last Judgment, where the souls will be in front of God and be divided into the saved and those destined for Hell, burning in the eternal flames. I guess that Miaskovsky had, in 1912, the feeling of an imminent world disaster (and he wasn’t wrong, as history has shown!). So I think that the awareness of the changes that were about to be undertaken in the society made him think about an "end-of-the-world" feeling.

Despite differences in harmony, there’s an undeniable “Scriabin-ish” feel to much of Miaskovsky’s writing. How much influence did Scriabin have on him?

Stravinsky and Miaskovsky, being exact contemporaries (born only two years apart) were both under the spell of Scriabin’s music and offer us a marvellous demonstration of two very different personalities each drawing complementary aesthetics from the same source: Scriabin’s late works.

Miaskovsky seems to have had a less fraught relationship with the Soviet government than other composers of his time – Prokofiev and above all Shostakovich. Do you think the lack of a similar narrative of struggle against adversity might have contributed to his relative obscurity since his death?

We could even say that, being a fervent communist, he found himself in complete agreement with the regime - unlike his friend Prokofiev, whom he brought to the USSR with the promise that he would be the regime's first composer!

In 1938 the Chant du Monde publishing house was founded in Paris and signed a Western agency agreement contract with Prokofiev, Khatchaturian and Shostakovich. Miaskovsky declined the offer, stating that he did not want a capitalist country to make any profit from his music. This refusal was extended by his descendents into the early 21st century and explains Miaskovsky's absence from the pantheon of the greatest Russian composers of the 20th century.

What led you to pair Miaskovsky’s music with that of Nicolas Bacri? Do you see particular parallels between the two composers, either in their life or in their musical style?

Yes, there are a lot of parallels between the two composers, the major one being to do with their musical expression. All the sonatas that I recorded on this album (the two by Miaskovsky and the two by Bacri) share this gloomy, lugubrious and dark atmosphere, while being also very polyphonic (they all contain fugues) and searching for light that finally overcomes despair. Bacri’s third sonata (which by the way is dedicated to the memory of Miaskovsky, and that’s not a coincidence!), seems to prolong the tormented climate of Miaskovsky’s third sonata (Bacri’s sonata has the undertitle Sonata impetuosa but that could also apply to the one by Miaskovsky!). On the other hand, Bacri suggests a more ethereal dimension in the ipnotico section of his sonata.

As far as their lives are concerned, I think that one might see also a parallel, even if it is not obvious at first sight: Miaskovsky started from a late-Romantic style of writing (cf the first sonata for cello and piano, Op. 12, which is very Chopinesque) and evolved very quickly towards a more expressionistic one. The second piano sonata Op. 13 is still late Romantic in its pianistic approach, and hides behind a rather Classical structure, but the tonal language has already evolved into an expanded tonality. This later leads (in the third piano sonata for example) to an almost atonal, and more bitter, language. Miaskovsky made this huge and drastic evolution in his harmonic language in a rather short amount of time. The same goes, but in the opposite direction, for Bacri, who started in the 1980’s with atonal music (his Symphony No.1 Op. 11, for instance, was dedicated to Elliott Carter) and then, from about his Op. 30 onward, moved into expanded tonality as atonalism began to strike him as increasingly obsolete. So, each in their personal way, both composers undertook a huge journey and went through an important evolution.

The notes to the album refer to Bacri re-embracing tonality even during the height of the atonal, Modernist era of the late 20th century. Do you think history is beginning to vindicate what at the time was a bold and countercultural decision by him?

I think that history will prove right those composers who abandoned the aridity of atonalism in favour not of an overly easy tonal simplicity, but of an enlarged and demanding sense of tonality.

Bacri and many other composers of his generation understood that the raison d'être for the pure atonalism of the avant-garde of the sixties was the Cold War context that required composers from the West to distance themselves from what was recommended in the East. Since 1990, it is arguably the writing of atonal music that should be regarded as old-fashioned. 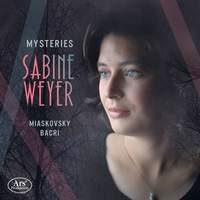