When my colleague James and I blithely rolled up to Covent Garden to hear Jonas Kaufmann and Lise Davidsen in Fidelio at the beginning of March, I don’t think either of us had much of an inkling that this would be the last live performance we’d experience in the flesh for…well, who knows how long. Perhaps that’s partly why this new recital-disc from the German tenor and his long-term Lieder partner Helmut Deutsch has beguiled and comforted me so much over the past few weeks, though the prevailing mood of wistful nostalgia will surely speak very directly to many others on its own terms in the light of recent events. 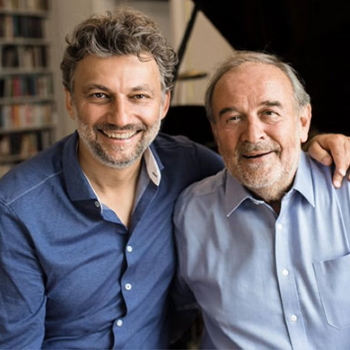 Selige Stunde is palpably a product of these distracted times: like Igor Levit’s Encounter and Daniel Hope’s Hope@Home (both released today), it stems in part from the artists’ music-making together in lockdown, something which comes across strongly in terms of both the programming and the interpretations themselves. As the interview in the booklet-note explains, the album was recorded ‘in private quarters’ in Munich after studios were closed for obvious reasons, and there’s a lovely, unbuttoned intimacy to these performances which is quite unlike anything they’ve previously set down in more conventional recording-conditions. The choice of repertoire, too, is freer and more wide-ranging than we’d usually expect from the pair, taking in German-language settings from composers including Tchaikovsky, Grieg, Zemlinsky, Dvořák, Strauss, and of course Schubert: Deutsch describes it as ‘our personal wish-list’, and there’s a special charm at the moment in hearing performers in music which evidently brings them joy and solace in the here-and-now. This is a programme which comes from the heart rather than the head (or perhaps A&R department), and it shows.

Though songs dealing with isolation and longing for happier times dominate, it’s by no means all doom-and-gloom: we kick off with an ebullient reading of Schubert’s Der Musensohn, Deutsch dancing around the voice with infectious energy and finding all manner of nuance and variety in a piano-part which can so easily verge on the mechanical in lesser hands. Kaufmann’s in full-throated, robust voice here and in the ensuing account of Beethoven’s Adelaide, where his ringing declamations of the beloved’s name might prove rather too akin to Siegmund’s cries of ‘Wälse!’ for some (personally, I loved it). In the interests of full disclosure, there’s perhaps some slight vocal awkwardness on one or two phrases here, as well as in Schubert’s Der Jüngling an der Quelle, where it seems Kaufmann has to work uncharacteristically hard to match Deutsch’s ravishing celeste-like pianissimo. Elsewhere, though, his trademark control across the whole dynamic range is as breathtaking as ever, particularly in Strauss’s Allerseelen (somehow more deeply felt and autumnal than on their previous recording, beautiful though that was) and Tchaikovsky’s Nur wer die Sehnsucht kennt. 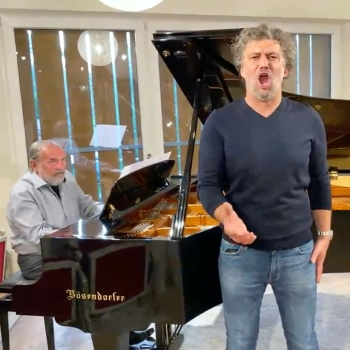 There are a few welcome rarities nestling in amongst the old favourites, not least the tender, jazz-inflected Zemlinsky song from which the album takes its title; Carl Böhm’s ardent Still wie die Nacht (apparently quite literally a song Deutsch’s mother taught him) is also a treat, but for me the pearl is Friedrich Silcher’s Ännchen von Tharau, which wouldn’t sound out of place in one of Beethoven’s folk-song collections from around the same time and is delivered with simple eloquence by pianist and singer alike.

The last two songs on the programme, depicting withdrawal from the world, cut uncommonly deeply in the current climate, and both artists do them proud: they find a wonderful stillness in Wolf’s hymn-like Verborgenheit, whilst Deutsch’s sublime shaping of the introduction to Mahler’s valedictory Ich bin der Welt abhanden gekommen is worth the price of the recording alone.

In an inadvertent reversal of Dvořák’s Songs My Mother Taught Me, I introduced my own mother (not usually a Lieder listener) to Kaufmann and Deutsch’s YouTube performances earlier in lockdown, and her observation that ‘they make you understand what the songs are about even if you don’t speak German’ has stayed with me as I’ve dipped in and out of the album – it’s no excuse for the lack of texts and translations in the booklet, but struck me as a lovely summation of the emotional directness of this recital. A blessed hour indeed. 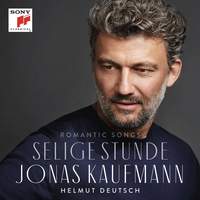