Chinese pianist Lang Lang is a household name in a way that few classical musicians ever truly achieve; even before his performance at the opening ceremony of the 2008 Olympics in Beijing brought his musicianship to four billion screens worldwide, he had amassed an impressive discography of recitals and concertos, and has continued to do so since.

One thing he has not so far been known for, though, is early repertoire - so the appearance of his two new recordings of Bach's Goldberg Variations, one live and one in the studio, might look like a significant change of tack for someone mostly known for his Classical and Romantic interpretations. But as Lang Lang explains, it's not quite the sudden shift that it might seem - this is music he's been interested in all along, and that he now wants to perform more widely.

There’s one big question that many people will surely be asking – as an artist who tends to record Romantic and Classical repertoire, this is a change of repertoire for you. What is it that’s now drawn you to record the Goldberg Variations?

For me, it matters because the Goldberg Variations are a different type of Bach work. They have many, many very virtuosic passages, yet at the same time many elements that resemble a big organ work. They form a very long piece too but are also very dynamic, almost like a symphony. So there’s a lot of room for me to play, in a sense.

I also just love Baroque music personally; it’s very different from Romantic repertoire but it’s very emotional – I have a great emotional attachment to Bach. But in addition, I thought this would be a great way to improve myself; to learn more things that I didn’t know, for instance in the area of ornamentation, and generally to make myself a better musician.

The accompanying notes mention Harnoncourt’s comments that, as a pianist in your mid-20s, you needed 'more solitude and stillness' in your performance of the Goldbergs. Do you think there’s something inherently introverted about these pieces that sets them apart from other works?

I’m definitely not just a virtuoso pianist: that’s only a part of me. The music is what matters the most, whether it’s passionate, tragic, intimate or something else. For instance Variation 25 of the Goldberg Variations – you cannot get more intimate than that. It’s the highest level of what I might call 'dark' music.

But I’ve never felt that I only like fast and exciting music; it’s just that in concerts, I’ve tended not to play the more introverted pieces to the same extent. It’s certainly not the case that I don’t like them, and now I’d like to do more, so this is a new beginning for something different. It’s a side to me that’s always been there.

There are two recordings of the Goldbergs on this album – one with an audience and one without. For you as a performer, how much difference does the presence of listeners make to the way you approach a piece?

Personally I prefer to have an audience when I’m playing, because then the mood is different. You can sense more breathing and more soul around you; you feel that you’re not alone. The performer is then a bridge between the audience and the music. If you don’t have the audience, it’s just yourself and the music, but if you introduce an audience then it becomes more of a 3D relationship with that extra dimension.

Also, of course, in concerts, you can only play it once; you have no choice! You have to play in the moment, and once it’s done you can’t do anything about it. In the studio, of course, you can mix and re-mix, you can change this or that, you can play a single bar ten times if you want! That allows you to achieve great precision of sound, of course; but you can’t repeat anything in a live performance, you do it once and that’s it. I always think of this as a kind of luxury – life is a real luxury, and you only get it once, and it’s the same in performance.

The reason I wanted to include both recordings is that for the live one I was very close to Bach’s grave, and I was able to play in the legendary Thomaskirche, so I particularly enjoyed the process of making music in that sense. Contrasting with that, a studio could be anywhere in the world; you just have to shut yourself off from the world, turn off your phone and think about nothing else. But I do enjoy that side of playing just as much, because I can listen back and play a passage again, sometimes several times. In live recordings, you only listen afterwards, after it’s all done – and you have to like it!

In preparation for this recording you did some pretty extensive groundwork with Andreas Staier and other harpsichordists, and listened to Bach’s organ being played in Leipzig; how much do you think it’s possible to bring all that research into a performance on the piano?

A lot, really. We can learn a lot of technique from the players of period instruments; the instrument itself is much lighter, and as a result it’s very easy to ornament. Sometimes when you play something it feels like it’s already ornamented! This is quite different from the piano. At the piano, you don’t need to ornament the notes because the instrument can achieve a legato sound for you. But at the harpsichord you can’t do this anything like so easily; the notes don’t connect in the same way, so you have to use ornamentation to hold it all together.

What I like about the harpsichord, though, is that it has extra sonorities – you can pull out a stop to double the sound, like on the organ, and it creates very different sounds. Sometimes you can get a very lonely sound – and this is something I’m really trying to explore, the idea of loneliness in Bach. It’s so personal, it takes you deep into your own little world, almost like a kind of isolation sometimes.

But another thing I like about Bach is that in this piece he’s trying to express the explosion of his emotions; he was a virtuoso organist with feet flying around just as fast as his hands, and there’s a lot of elements in the Goldberg Variations, like Variation 29 for instance, where there’s a really strong sense of it being an organ piece. We need to think of it not only as a harpsichord piece but equally as music for the organ. We have to draw on everything the Baroque has to offer; cantatas, gigues and everything; as long as you’re putting everything into the Baroque form, you can access those sounds and feelings through the piano.

It does matter that, as pianists, we spend some time working with pure Baroque musicians. Not pianists, but harpsichordists, Baroque violinists and so on – it’s a different area. It’s like the relationship between classical music and jazz. Once you understand this new and different form, you can start to enjoy it.

In a few places you expand on what’s on the page, for instance doubling some octaves in Variation 29 and fleshing out the final chord of the Quodlibet – how would you respond to people who would insist that performers should adhere religiously to the score, neither adding nor removing anything?

I don’t think that’s right at all. For one thing, there’s the influence of organ music, which was important for Bach, and in addition, when harpsichordists play these variations – Variation 7 for example – they add in intervals that aren’t on the page, thirds or fifths here and there. And this is totally normal for them – whereas as pianists, we’re not allowed to do anything of the kind. This is why I feel there’s some common ground between Baroque music and jazz; we’re actually allowed to add things to the music and it’s not as fixed. As long as they sound convincing and Baroque, of course: you can’t suddenly add in elements of Prokofiev or Bartók! You have to be within the Baroque style, but within that, we can add more – which is why it’s so interesting to me. In Classical music that’s not something we can do; note-wise, if you add something to a Beethoven piece it sticks out instantly and jumps out at you, but in Baroque this isn’t so much the case. Which is really good news.

You ornament relatively heavily compared to some other interpreters (particularly in the repeats in the opening Aria); is this all meticulously prepared in advance as part of learning the music, or is it added in a more improvisatory way that’s unique in each performance?

I actually did learn everything all together; that was part of the Baroque training I did. Andreas Staier even came to my concert and helped me to fix some of the things that he felt were not right for that period of time; he corrected some of my ornamentation. The reason that I’m confident in doing these things is that I’ve learned part of how to play Baroque music in a Baroque way. This is why I’m not afraid to do these unusual things that might make people think I’m crazy! We have to respect the Baroque style but we don’t need to always learn music from other pianists; what’s the point of learning Baroque from a modern piano player?

I felt it was important to go back to the original and authentic style, and having done that I now feel comfortable and confident in doing these things. If I hadn’t, I would be too scared of doing it completely wrong. This is quite normal, I think; if you listen to Murray Perahia or András Schiff’s recordings, they are constantly doing beautiful ornamentation. Likewise Glenn Gould and Wanda Landowska's recordings from the last century - all of them ornament extensively, but beautifully. It’s not an extra on top, it’s part of the music. 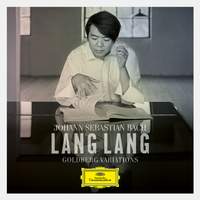 Studio recording from Jesus-Christus-Kirche in Berlin 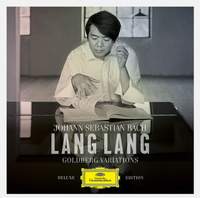