Recently signed to Hyperion Records, where they made their début in 2018 with an acclaimed recording of Manuel Cardoso's Requiem and other works, Portuguese vocal consort Cupertinos have a simple mission - to bring the music of sixteenth- and seventeenth-century Portugal to a wider audience.

It's a period when Iberian culture was enjoying something of a Golden Age, with composers such as Portugal's Duarte Lobo at the height of their powers. Lobo is the focus of Cupertinos's new album, built around two rediscovered Masses and a set of Christmas Responsories in which the singers' audible commitment to the music brings out its expressive nuances.

Cupertinos's director, Luís Toscano, was kind enough to share some of his thoughts about this new recording.

Cupertinos are a relatively new group – founded just over a decade ago. Can you tell us a bit about how the ensemble first came together?

In 2009, the President of the Foundation, Pedro Álvares Ribeiro, decided to assemble a professional vocal group dedicated to the celebration of the unique and mostly unknown repertory of Portuguese musical heritage from the sixteenth and seventeenth centuries. By October that year, a group of singers had been gathered and the first rehearsal was held in the Foundation, exploring some of Duarte Lobo’s and Filipe de Magalhães’ most well-known pieces. Since then, Cupertinos has been establishing itself as an ambassador of Portuguese polyphony, bringing to life the music of Portugal’s greatest Renaissance composers, with a steady, virtually uninterrupted activity (before the pandemic) for just over a decade, with almost 200 concerts thus far.

The group continues to unearth the largely undiscovered heritage of Portuguese music from this era, aided by its strong connection with the University of Coimbra, one of the richest archives of Renaissance music anywhere in the world. We have performed over 100 such works to date, several of which have been transcribed from the original sources by members of Cupertinos with the expert and generous help and orientation by the musicologist Prof. José Abreu, our informal scientific advisor and friend.

Your ensemble specialises in performing polyphony by Portuguese Renaissance composers – of whom Lobo is the best-known example. What distinguishes the Iberian composers of this period from their contemporaries elsewhere in Europe?

Since the middle of the fifteenth century, Europe was experiencing one of the most fecund, exciting and troubled periods in its history, and looking back at that period two phenomena may be underlined in this sense: firstly, there was a burgeoning flow and interchange of people and ideas around the continent – naturally, including Portugal and Spain; this is particularly visible with artists, who often travelled from town to town after a particular master, or seeking protection or sponsorship from a noble family; secondly, the revival of the Humanist ideals and the notion of anthropocentrism, with nowadays’ sense of individuality and masterwork, were still starting to get momentum.

In the musical environment, the confluence of these two phenomena meant that, in many ways, there was a shared language and style of composition, which we now commonly recognise as ‘Renaissance Polyphony’ regardless of its place of origin. There was a true network connecting musicians all over Europe. Just to mention a few of the ‘Portuguese connections’ in the sixteenth and seventeenth centuries: Vicente Lusitano was published in Rome (1551) and Duarte Lobo in Antwerp (1602, 1605, 1621 and 1639); Duarte Lobo, Filipe de Magalhães and Manuel Cardoso wrote parody Masses based on works by Guerrero, Palestrina, Manchicourt, Clemens non Papa or Hollander – meaning that they had access and were well acquainted with their music. To these we could add the Library of D. João IV, probably the most comprehensive repository of music from all over Europe, unfortunately lost in 1755 in the catastrophic earthquake and subsequent fires in Lisbon.

This leaves us in a difficult place when trying to assess stylistic distinctions on a regional level. It might be easier to pinpoint distinctions between individual composers, more in terms of favourite or recurrent musical gestures – but even then we never get an absolute consistency. Maybe when dealing with liturgical music - which is Cupertinos’s main focus – we may bring forward a special prevalence in the Iberian Peninsula of music for Marian Feasts and for the Office of the Death. But again, this probably stems from the relevance given to these particular celebrations in the liturgy of the Iberian world. Possibly this unsolvable need for labels and to put things in boxes just reflects an irreconcilable clash when looking back 500 or 400 years with our twenty-first-century eyes and mindset.

Within Iberia, how much of a distinction do you find there is between the Spanish and Portuguese styles?

Again, it is very hard to generalise and to try to draw a ‘stylistic line’ between Portuguese and Spanish music at this time. For a number of reasons – linguistic, religious, geographic/orographic - the interconnections were even more intense than with the rest of Europe. This was particularly evident during the period of the ‘dual monarchy’ (1580-1640) when, following the death of the Portuguese King D. Sebastião in the Battle of the Three Kings, in Alcácer-Quibir (1578), and the dynastic crisis that ensued, Portugal was under Spanish rule until the acclamation of D. João IV.

This major episode in the shared history of Portugal and Spain has led, however, to an aspect which has somewhat convincingly been pointed as a specificity of the Portuguese repertory in this period. Linked to the surgence of Sebastianism - a messianic myth which believed that the deceased D. Sebastião would return to rescue Portugal from the Spanish rulers – several composers arguably started to privilege texts or themes which evoked a longing for the Messiah. A commonly alluded example is Duarte Lobo’s choice of models for the Masses included in his Liber II Missarum (1639), dedicated to the future D. João IV (at the time still Duque D. João II de Bragança) merely one year before his acclamation.

The Salve Regina included on this album required the reconstruction of the first tenor part (through extensive musicological work by José Abreu) due to a missing part-book. Do you think this might ever have happened in Lobo’s own time – could there be works in the repertoire where one part has secretly been a contemporary 'repair-job' all along?

Actually, among the works featured in this recording, José Abreu has reconstructed the tenor part in the 8 Christmas Responsories and the antiphon Alma Redemptoris Mater, all included in Duarte Lobo’s Opuscula (1602). But to answer your question: yes, absolutely - and not even secretly, but very often openly. As we have seen, the compositional techniques of parody and contrafacta, as means of paying homage to a given composer, was commonplace. Sometimes, they were even the output of a healthy competition, fundamentally opposed to the negative charge of nowadays’ plagiarism. This stems also from the very different approach at the time to the concepts of authorship or finished work. This was their living repertoire, written for a very practical and specific purpose – the liturgy. So, their approach had to be a practical one: if they had less singers available for a particular celebration, they would, for example, adapt a six-part work for four parts only, without thinking they were somehow ‘betraying the composer’s intention’. Reversely, if the chapel master particularly fancied a five-part motet, and for a special feast had a double choir with instruments at his disposal, he could ‘simply’ add three extra parts to the piece for that particular occasion.

Your ensemble is a mixed one of adult voices, generally singing either one or two to a part; how closely does this correspond to what we know of performance practice in Lobo’s time?

The information we have concerning the actual performance practice in those days is still very scarce. It consists mainly of payment sheets, obituaries or descriptions of specific celebrations, like royal weddings. Sometimes, the scores themselves have clues or indications from which we may infer how things were performed in a particular setting or occasion. In each case, it seems likely that the actual size of the ensemble performing the music on a given celebration depended mainly on the importance of said celebration, the financial resources at their disposal and the available musicians. Of course, the major religious institutions would have a resident core group of professional musicians, often with boy choristers providing the top lines of the polyphonic texture.

When we approach and immerse ourselves in this amazing repertoire from Duarte Lobo’s time, in order to perform it in a present-day concert setting, we are in many ways detaching it from its original historical, liturgical, social and even linguistic framework, which is in itself a huge challenge and responsibility. Cupertinos’s purpose is not to try to emulate a sixteenth-century liturgical service, but to unveil our musical heritage, trying to make it work and convey meaning to modern audiences. And for that, our performance approach is the one which we feel that, in our time and circumstance, best suits those purposes.

This is your second album on Hyperion, following your acclaimed recording of Cardoso’s Requiem. Can you tell us anything about your future plans?

Naturally, we will continue our exploration of Portuguese musical heritage from the sixteenth and seventeenth centuries. Therefore, future recordings will hopefully keep being another materialisation of our journey as a specialised ensemble. We have already performed over 250 astonishing works by composers such as Duarte Lobo, Manuel Cardoso, Pedro de Cristo, Filipe de Magalhães or Manuel Mendes, and also some lesser-known or even unknown/anonymous composers from the same period. The possibilities abound, the hard part is often narrowing the options down to fit in a 70-minute album! 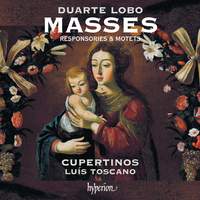 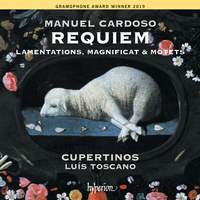