Interview,  Ian Venables on the first recording of his Requiem

British composer Ian Venables has established himself as something of a spiritual heir to lyrical songwriters of the English school - Butterworth, Quilter, Vaughan Williams and others. While far from averse to composing in other styles, the majority of his performed and recorded works have been in this solo-vocal idiom - so the emergence of his Requiem, premiered in Gloucester Cathedral in 2018, was a pleasant surprise. Fittingly, the choir of the Cathedral also sing on its first recording - bringing a melodious work of quiet profundity to a broader public.

I spoke to Ian about the process of writing this work, and the challenges and opportunities it represented for him as a composer.

It seems so common for contemporary composers to write hybrid works, interpolating other texts among the words of the Requiem, that your decision not to do so is worth remarking on. Did you consider writing that kind of work, or was this always conceived as a more 'traditional' Requiem from the outset?

My Requiem was a commissioned work and so its nature was, to a large extent determined from the outset. This is because the commissioners Bryce and Cynthia Somerville wanted a liturgical setting of the Latin Mass that could be performed at their mother’s funeral. However, as I started to write, I began to conceive the Requiem as a work that could be performed in a non-religious setting. Also, as the work progressed some of the musical ideas introduced in the earlier movements appear again in the later movements. I think this gives the work a feeling of cohesiveness and makes concert performance more than possible.

Like Fauré and Duruflé, you’ve chosen to lean away from the high drama of the Dies irae sequence of the Requiem text. Do you think the tendency to play down such alarming, apocalyptic imagery and embrace the more comforting and even optimistic side of the Requiem is a reflection of changes in the way we think about death and religion in contemporary society?

I totally agree that, theologically speaking, the Anglican and Roman Catholic Church have both moved away from the idea of a vengeful God. Indeed, I found it fascinating that when comparing earlier translations with more recent ones, that the whole concept of Hell has practically been removed from the liturgy. For example, in a recent translation for an Anglican service, the Latin word for Hell, 'Tartarus' became 'The Black Lake'! The contemporary re-working of the Latin text in more comforting and consolatory terms was certainly in the forefront of my mind when composing the work. It was also one of the reasons why I chose not to set the Dies irae.

Though you’re not exclusively a song composer, that’s clearly an idiom you feel a particular affinity with. How much of that approach did you bring to the writing of this Requiem – both in the chorus parts and the solos?

In my songwriting, the mirroring of the text is crucial. The words always take centre stage and the music comes from a close engagement with them. This is certainly the way I approached the setting of the Requiem texts. In some of the longer sections, for example, the Offertorium, I have tried to reflect its constantly shifting narrative through subtle changes in mood of the music and in the choral writing. There is obviously scope for more contrapuntal writing which creates interest both rhythmically and harmonically. What is different though between choral writing and song writing, is how to manage the juxtaposition of different words at the same time; if managed badly it can sound very 'scrappy'. By the same token I have tried to avoid constant use of 'hymn-like' textures where inevitably words will occur at the same time. The ear becomes tired of this texture after a while.

Who would you say were the main influences on your own stylistic development as a composer?

My music is melodically driven and underpinned by a tonal musical language. Idiomatically speaking, my music follows in the lyrical tradition of Vaughan Williams, Finzi and Tippett.

The notes accompanying this recording allude to your identifying the Libera me as 'the biggest creative challenge' for you when writing this work. What was it about this section that set it apart from the others during the compositional process?

Setting the Libera me did prove to be the work’s greatest challenge. The main reason for this was that I didn't wish to set such violent and vehement words , such as those found in the Dies irae text. However, for some inexplicable reason, I hadn't noticed that the words of the Dies irae also formed part of the Libera me! I almost abandoned the whole idea of setting this movement, until of course I realised that it would not really be a Requiem without it. Another reason why I was apprehensive about setting them, is that the text is very long and consists of several dramatically contrasting parts: this would certainly pose a musical challenge. Looking back on it now, the Libera me has turned out to be one the most musically dramatic and expressive movements in whole work: it is also the longest!

Though not quite your first choral work, this Requiem represents your first foray into large-scale writing for choir (at any rate if the twenty-minute Awake, Awake from 1999 doesn’t count as 'large'). Do you think this is a genre you might return to more frequently in the future?

Writing such a large-scale choral work has certainly taken me by surprise. I never envisaged ever writing such a work, but there it is! It has most definitely made me think of writing more choral music. Indeed, I've already accepted a new commission for a short anthem for choir and organ: so, I think I have answered my own question! 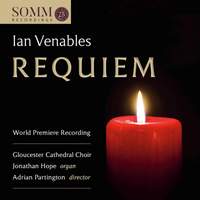