Schumann's cello concerto, one of the last works he wrote, has become a firm favourite with soloists and audiences alike - but the version commonly heard today is in fact the result of fairly heavy modification by the intended first performer Emil Bockmühl (and subsequent others. Having had her interest as a performer piqued by discrepancies between the various extant editions, cellist Josephine Knight embarked on an ambitious project to track down the manuscript and recapture the original version of the concerto, which she concluded had been so obscured by later additions as to be unrecognisable.

This album, in which she performs her own new edition of the concerto, is the result - a work of both musicianship and musicology, peeling back centuries of alterations and revealing a very different work to the one we usually hear. By comparison, the "new" concerto is both lighter in spirit in some places, and far more lyrical in others. I spoke to Josephine about this project, and about how the cello concerto came to be so heavily modified in the first place.

Between the endless “helpful” modifications to this work, Joachim’s well-intentioned ban on performance of the Violin Concerto and other such efforts, Schumann has been subjected to more posthumous meddling than many composers. Why do you think this is so much more the case for Schumann than for others?

Schumann’s mental health issues are widely acknowledged, and I am convinced that this has affected the overall perception of his reliability and decision making. With the fact that he died before even reaching 50 years of age, the cello concerto (Concertstück) written just 6 years before his death. The first published edition coincided with a particularly severe intense mental episode where he was hallucinating, he was in deep distress and subsequently attempted suicide. Schumann has fallen victim to generations of performers using his mental health issues as license to add unlimited changes.

Unlike Piatti, whose technically-demanding works also feature on this album, Schumann was not a cellist. Do you think this might have contributed to posterity’s willingness to modify his cello writing in the concerto?

It was a well-established tradition at the time for performers to add and change solo parts of concertos. Piatti – who has been of great interest to me as I hold the Piatti Chair at the Royal Academy – was hugely influential both as a performer and as a teacher. His compositions are technically fiendish and the performer is kept pretty busy, therefore there isn’t any opportunity to meddle! The fact that Schumann was not a cellist has definitely contributed to unlimited alterations and modifications. This was the reason he initially offered the work to Robert Emil Bochmühl, whom he wished to oversee the work, before submitting it to publishers as well as the hope that Bochmühl would take it on and perform it. This turned out to be disastrous, as Schumann found Bochmul’s “suggestions” irritating and disregarded almost everything, apart from the tempo marking in the 1st movement. Bochmühl also made many excuses about not performing it and a premiere never materialised. Although this was the only major cello concerto written in the early 19th century, it was slow in becoming accepted and interestingly it wasn’t until the great Pablo Casals performed it that it gained recognition, and now it is one of the major works in our repertoire.

Do you worry that the modified version, with tweaks from Bockmühl and others, has become so embedded in the concertgoing public’s mind as the “canonical” form of the piece that the rediscovered original will struggle to establish itself?

This version is not intended to be the definitive but rather a true representation of Schumann’s first thoughts, not his last, therefore bringing something fresh and new to this well-loved work. So far, I have received positivity, interest and curiosity for the new edition soon to be published by Peters. Audiences might not immediately notice all the intricate differences (which I found from tireless study of the solo and orchestral score over many years), but hopefully they will accept it as it stands now with the impact that all the changes make to the overall impression. One never knows how the public will react – it was slow to gain popularity initially, but now is one of the major works in our repertoire – so who knows! I do genuinely believe that the true essence of the work will be evident from hearing it in this original version rather like listening to another dialect in a foreign language.

Some alternative versions – a recently-uncovered early draft of Tchaikovsky’s Piano Concerto No. 1, for instance – differ from more commonly-played versions not just in surface details and phrasing but in overall mood and tone. Do you find this is true of the Schumann?

Bochmühl definitely interfered with the work and perhaps Schumann’s mind too, playing on embedded insecurities, but once all the over-accented notes are eradicated, original sweeping long phrases reintroduced, changes of dynamics and notes corrected, and the discovery of the final section – which we have recorded on this disc for the first time – are all implemented, this piece becomes lyrical, melodic and cantabile in character and the mood strikingly upbeat. Schumann’s love for Clara and her support of this work are beautifully encapsulated in this rendition.

Schumann’s mental health problems often seem to become the thing “everyone knows” about him, like Beethoven’s deafness, and people have even blamed them for perceived “weaknesses” in his works. Do you think the way we think about Schumann’s music gives too much weight to the personal struggles that he faced towards the end of his life?

Certainly when I first studied this piece as a student, I was encouraged to think about Schumann’s mental state and reflect his turmoil through clear musical intent in performance. Little did I know then what I have now come to realise. Undoubtedly Schumann’s mental illness was significant and affected his life, but this seemed to provide an excuse for generations of performers to introduce bowings and other changes which ultimately diluted the original conception of the work beyond recognition. I do feel that it would be unfair to blame Schumann for his “perceived weaknesses”, because ironically Schumann wrote the Concertstück towards the end of his most productive years of writing. It was abundantly clear, taking only two weeks to complete, and seeing for my own eyes in the Krakow and Bergamo autographs, that he was, in fact, in a good mental state, with clarity of mind whilst composing this work. 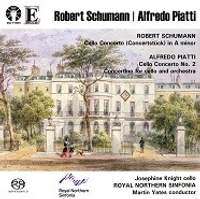