Phantasm have an enviable reputation as one of the leading exponents of viol music, focusing largely on the enormous wealth of polyphonic chamber works written for viol consorts by composers from England where this style flourished. Previous albums of consort music by Lawes, Locke, Tye and others have won critical acclaim, and they're also regular collaborators with cathedral choirs seeking to reproduce authentic performances of verse-anthems by Gibbons, Tomkins and others.

Their latest album sees them explore arrangements of keyboard works by Bach - an approach which on the face of it seems almost as anachronistic as playing Beethoven on the harpsichord but, as director Laurence Dreyfus explains, turns out to offer an illuminating perspective on the intricate part-writing, and to present the well-known Well-Tempered Clavier in a wholly new light.

Although the viola da gamba remained in use in Bach’s time, it’s generally thought that the viol consort itself had already died out by this time. In terms of how Bach himself would have conceived of his music sounding, how much of a stretch do you feel it is to adapt it for this ensemble?

I suppose I’m most interested in how Bach heard his polyphony inside the confines of his own head and what kind of expressive world he wished to evoke by it. Even in keyboard music he was routinely alluding to a huge range of instrumental and vocal styles and genres – cantata and opera arias, Passion choruses, chorale-based pieces, violin and ensemble concertos, flute and oboe obbligatos and so on. In transcribing this music for viol consort, I thought we could say something new about these piece by shining a seemingly archaic light on them, exposing their historical roots. And this meant avoiding works that were specifically idiomatic to the keyboard, for example, which would sound artificial when played by a viol consort. Instead, I sought out works in which our experience in playing English polyphony – with its wonderfully independent lines – could expose Bach’s amazing commitment to linear independence. What surprised me when we came to rehearse this repertoire is how very well a viol consort - with its admixture of extreme linear clarity and warm blend - is suited to enliven the personalized interaction among Bach’s voices. Even keyboard pieces intimately familiar to us assumed a new identity and expressivity. At the risk of sounding arrogant, I hope we’ve portrayed and clarified musical ideas already implicit in Bach’s musical thought.

Rather than simply tackle the entire Well-Tempered Clavier, you’ve gone for a selection of Bach’s polyphonic keyboard works, some of requiring transposition in order to fit the intonation of the consort. At the risk of being contrary: doesn’t this lay bare the challenge of transferring equally-tempered music into other tuning systems?

Harpsichords or organs in Bach’s day were never tuned in equal temperament and the title of the Well-Tempered Clavier emphasises that an appropriate tuning for all 24 keys was to be tempered ‘well’, not equally. Having said that, viols have moveable frets and we also use subtle adjustments with our fingers to tune and temper sonorities in the course of grappling with this exceptional music. I chose to transpose some keys not so much to accommodate the tuning but to favour the sonority and resonance of our instruments so that the musical ideas were conveyed most effectively. More than a few of ’48 were originally composed in less daunting keys than the later version, and Bach famously transposed the keys of his own works, such as when he turned violin concertos into harpsichord concertos.

You mention having intentionally retained some of the more alien keys, precisely in order to explore sonorities that conventional viol writing rarely uses. Would viol players during the Renaissance ever have considered playing in these distant keys?

There were in fact some daring chromatic experiments in the earlier English consort repertory by composers such as Ferrabosco and Jenkins. In these fantasies the music cycles through a full range of chromatic keys within an individual fantasy, somewhat like entering and escaping from a labyrinthine maze. So there’s a precedent for a viol consort having to cope with extremely remote harmonic regions, though no one really approaches JS Bach in plumbing the emotional depths of distant keys filled with such unusually crafted chromaticism and counterpoint.

In the notes to this album you quote Charles Rosen’s contentious statement that only keyboard players can truly feel Bach’s fugal writing. But do you think these consort adaptations might actually enhance the polyphonic-ness of the music by giving each line to a distinct individual?

Absolutely. I don’t think Charles Rosen was quite right in asserting that the control of a fugue always lies in feeling it in one person’s fingers, for no one sitting at the keyboard can identify with the vagaries of each distinct voice all at the same time. And in the kind of pieces I’ve chosen, there are no duff parts! Each one is lovingly sculpted as if it’s a distinct personage. So a consort approach surrenders some control of the whole, but does so in the service of a communal experience that harmonises competing strands in the most extraordinary way. In characterising the personal identity of each voice as it vies with the others, we often felt engaged in a kind of profound musical diplomacy negotiated among like spirits. By being able to hear more of Bach’s inner voices, I hope listeners will sympathise with our attempt to expand the corpus of the composer’s ‘chamber music’ by realising more of the works’ polyphonic potential.

The album’s title, The Well-Tempered Consort I, implies more explorations of Bach to come – can you tell us anything about your future plans in this area?

We’ll soon be recording a second Bach volume, this time comprised solely of Preludes and Fugues from both volumes of the Well-Tempered Clavier and ordered as an affective journey through contrasting styles and genres on which the composer imprinted his own personal stamp. 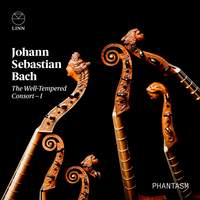 Bach: The Well-Tempered Consort – I