The English Baroque Soloists' leader, Kati Debretzeni, presents a new recording of Bach concerti - pairing two works originally written for the violin with two arrangements of harpsichord concerti, one by Wilfried Fischer and one by Debretzeni herself. She was kind enough to share some of her thoughts on the role instrumentation plays in Bach's music, and on the process of arranging his Harpsichord Concerto No. 2 for her own instrument.

Of the two “adaptations” on this album, one (the D minor concerto BWV1052) has been the subject of scholarly dispute for some time, as to whether it was ever intended by Bach to be performed on the violin. The debate has gone back and forth over the decades; where do you think the truth lies?

The dispute element of this debate is quite new - this concerto was thought to be Bach’s own adaptation of a now-lost violin concerto as far back as the 19th century. Violinists of great fame like Ferdinand David tried their hands at reconstructing the original. The reasons for this proposition are the particularly violinistic extended bariolage passages of the first and last movement, so easy to perform on two strings alternating as well as making full use of the open strings of the fiddle. Additionally, there is a harpsichord concerto autograph in Carl Philipp Emanuel Bach’s hand which is an earlier and somewhat simpler version of his father’s famous BWV1052 concerto, and the conjecture is that this is CPE’s arrangement of the now-lost violin version, which he might have arranged for himself to learn. As a player purely looking at the instrumental suitability, I find it difficult to believe that there was no such original version, although I don’t have enough scholarly grounds to engage with the likes of Christoph Wolff and Peter Wollny who have argued that the original is an organ concerto.

You note that the version recorded here, by Wilfried Fischer, contains slight adaptations to the solo part in order to better suit the capabilities of the violin. Did you find there any were passages that seemed “un-violinistic” or awkward on that instrument?

No, there are no unplayable passages. I adapted just a few notes here and there to keep sequences more logical, in places where I was wondering if CPE Bach (on whose version the Fischer reconstruction is based) veered off from the original for convenience’s sake, or because of the limitations of the ambitus of the harpsichord. I also added some orchestral parts from JS’s version, such as the orchestral violins playing in triads with the soloist in the first solo passage of the third movement, which in CPE’s version is a very empty single line. The insistent repeated left hand quavers in the cadenza of the third movement (left out by CPE/Fischer) were re-instated here, in the continuo section, for musical/rhetorical reasons.

While your performance of BWV1052 is an adaptation that may or may not have originated with Bach, the version of BWV1053 is definitively new – your own work, never recorded before. How much work did you find it took to refashion this piece into its new form as a violin concerto?

Firstly, having arranged this concerto for the violin I found out that the harpsichordist and conductor Ottavio Dantone has already done it before me, with Viktoria Mullova as soloist. However, his arrangement differs quite a bit from mine in the choices of orchestration and the reconstruction of the bass line, so this version is definitely new! The arrangement took a huge amount of work over a couple of months. The biggest challenge was fashioning a continuo line - in a number of solo passages in the original version the left hand of the harpsichord provides the bass line whilst the orchestral basses sit still, but the writing is highly virtuosic, definitely not suitable for an orchestral continuo line. Luckily, earlier versions of all movements survive in cantatas, with the organ as obbligato instrument. There the organ’s right-hand line is the same as the harpsichordist’s in the concerto version, whilst the organ’s left hand is doubled by the orchestral continuo-line (an organ’s left hand is less distinct acoustically than that of a harpsichord, and in the cantatas the choir/vocal soloist is singing above the organ line, hence the need for doubling it on a bowed instrument, the orchestral bass). This gave a good starting point to construct the bass-line of a violin version. The other preoccupation I had was to make the solo line less ‘harpsichord-like’ and more suited to the violin - for this I looked at Bach’s own arranging techniques from violin to harpsichord - both the A minor and E major violin concertos as well as the fourth Brandenburg concerto have harpsichord versions in Bach’s own hand. I then tried to do the reverse - for example simplifying ‘tirades’ filling in larger intervals for acoustic purposes in the harpsichord version. And this was just the beginning - it was a lot of wonderful musical-Sherlock work!

It’s common for the great composers of the Western classical canon (perhaps Bach more than any other) to be placed on pedestals and given an air of untouchability. Did you worry when creating your version of BWV1053 that you were trespassing on holy ground – or indeed, do you worry that that’s how others might see the results of your work?

As to trespassing on ‘holy ground’ - I’m afraid I am an agnostic in all respects... Bach was a musical genius who gave us masterpieces that provide a lifetime of challenge and opportunity to find more in them every time one plays them. Today you can hear him as a ringtone (the Badinerie from the second Orchestral Suite), as muzak in an elevator, in jazz arrangements (long live Jacques Loussier!), and that is because the way his music wants to make you dance and sing is universal. There are so many different levels on which to enjoy it and to be enhanced by it - in today’s times we need all the redemptive faculties music can offer, and Bach has something for everyone at any time of life. The more people get to engage with his music the better! We can no longer afford to worry about ‘untouchability’...

As to the other half of this question, I cannot think about how others see my work as that is out of my hands - and I am primarily a player, not a musicologist. I hope by publishing a violin version of another Bach concerto which is a wonderfully compelling piece of music with a sublime middle movement, I contribute something to the violin repertoire of those players (students, professionals, amateurs) who wish to play/learn another concerto having acquainted themselves with the A minor and E major, but feel slightly daunted by the D minor. The best thing of course is for everyone to make their own arrangements - all the harpsichord concertos can be (and have been) used for this purpose!

You mention that sources are unclear as to what solo instrument was originally intended for BWV1053, with at least four, very different, possibilities. In our modern age this seems baffling, but perhaps specific ‘instruments’ abilities and timbres were less important to Bach than one might assume. So how did we get from that rather laissez-faire mindset to our current, relatively rigid, view of his concerti?

An excellent question - possibly more ably answered by a cultural historian. Bach did have very specific relationships with a number of instruments he uses for depicting different ‘affects’ (the eliciting of a desired emotional response in the listener). In cantatas and passions for example, he uses recorders in conjunction with death and redemption; the viola da gamba in conjunction with acceptance of one’s destiny; the flute and oboe as instruments of introspection, hope, redemption, and so on. However, the concerto form was different for him - there the instrument is secondary to the musical content, although he never strays from using the intended solo instrument idiomatically, just as in cantata obbligati. His writing in this genre is such that it is suited to ‘multiple users’ - that is part of his genius, and it is also based on a much older seventeenth-century practice of music being written to suit whomever is around; a Trio-sonata by Cima or Castello can be played by two recorders, or two violins, or two cornettos - a highly practical and pragmatic approach. Today (after several big upheavals throughout the 19th century, and the cataclysms of two world wars in the 20th, plus one industrial and one technological revolution) the world is specialised and specific: we like being good in one thing. Musical instruments are pushed to the limits of their ability, yet we have lost the flexibility of them being interchangeable, and thus to be able to play and enjoy music not written for your own instrument. Bach would probably be amused...

Alongside BWV1053, many of Bach’s other concerti are themselves adaptations, with a fair proportion of them existing in more than one widely-performed version. Are there other works that haven’t yet been arranged in this way, but which you think might respond well to this kind of treatment?

A number of other works by Bach have already been widely arranged: the lute/guitar/mandolin has appropriated most of the violin and cello suites and partitas (in themselves interchangeably played nowadays); the organ trio-sonatas have been arranged for just about any possible instrumentation, and you are likely to hear a trombone, tuba or double bass tackling the cello suites too. The Art of Fugue is eminently suitable to be played on any family of instruments, whether bowed or blown. Ideas for more: the two-part inventions for keyboard are a prime candidate for duets between just about any high and low instrument, and the three-part ones can be arranged to string or wind trios, gamba consorts it recorded ensembles. The keyboard suites and partitas could be arranged for string ensembles. The beauty of Bach’s language is that the content is not dependent on what instrument you play - whatever your skill, there is a piece (in fact many more than one!) of Bach for you to play and enjoy. 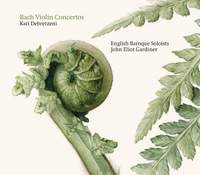