Following on from last week’s conversation with David Owen Norris about chamber reductions of Mozart overtures and concertos for Jupiter Ensemble, I’ve fallen under the spell of another new recording which makes a wonderful case for nineteenth-century transcriptions of Classical orchestral works: Ivan Ilić’s accounts of three Haydn symphonies arranged for piano by the tenor, composer and conductor Carl David Stegmann (1751-1826), released on Chandos earlier this month. It was a great pleasure to speak to Ivan about the serendipitous chain of events which led to these world premiere recordings, and the interpretative challenges and rewards posed by translating these works to the piano…

These scores are real rarities - how did you come across them in the first place?

There are so many pieces to the story, but it all started when my friend Veronika met someone in a supermarket in Cologne who’d recently inherited several huge crates of music from an elderly lady who she’d been helping with her groceries over the years: this lady had studied at the Cologne conservatoire, and even though she gave up on music as a career she seems to have continued buying scores throughout her life. (Cologne’s quite near the Dutch border, and we traced some of them back to Belgian and Dutch shops as well as German). She was in her hundreds when she passed on, and as she didn’t have children she’d left various things to her neighbour, who didn’t read music at all and had no idea what to do with it. Veronika loves stories of destiny and fate, and she felt that something was 'meant to be' through this chance encounter, so she called me up and asked me to take a look; I was really sceptical at first, as I assumed it would just be old editions of Bach Preludes and Fugues and Chopin Nocturnes and the rest, but I turned up in Cologne anyway. Because Veronika had only been there for about a month, we googled around and found a piano shop nearby, and they were kind enough to let me sight-read scores there for hours. One of the albums was a collection of four Haydn symphonies transcribed for piano, and when I started trying out No. 44 everything just clicked into place – even when I was sight-reading it very slowly, it just sounded like it worked on the piano, which really surprised me.

Did that chance encounter provide enough material for the recording, or was there archive work involved further down the line?

I played No. 44 for London Piano Day in 2016, and people loved it, but I couldn’t really see a way to take the project forward, because the other three symphonies in this collection just sounded more like transcriptions. I tried to trace copies of other transcriptions through Germany’s library system, as they have a search-engine which you can use to track down eccentric or esoteric things; we found one in Braunschweig and another in Saarbrücken, I think, but I would have had to travel quite a bit to even check to see if they were of any interest. But what happened next was pure serendipity: I was filming a short documentary series on Anton Reicha in Bonn, where they have a concert-hall and a museum and also a wonderful archive with hundreds of scores that were published in Bonn by Simrock. I got talking to the head of musicology there, and I said ‘Oh, by the way do you think you have any of these Stegmann Haydn transcriptions?’; she came up with about twenty, and I was astonished because it was the only place in the world that had more than three! I just couldn’t believe it, so I changed my travel plans and stayed over for a couple of days to read through them: the archivists at Bonn deserve a lot of credit, because if it weren’t for the fact that the music was arranged and published in the city then they wouldn’t have been in this library and I’d never have come across them.

So are some of the transcriptions more successful than others?

I’d say that it’s not so much that certain transcriptions are better in themselves, and more that some of the symphonies translate more readily to the piano than others. We know that Haydn composed at the piano, which also raises the intriguing idea that this is a way of reverse-engineering the composition-process: he would probably have improvised these themes at the keyboard, so this is a way of hearing the source-material in its original clothing. It’s true that a lot of it does sound good on the piano, but there are certain textures (like tremolos) that are just obviously orchestral - and of course when you have him passing a repeated theme from the flute to the violin, for instance, in the transcriptions it’s just the same thing happening twice!

There are certain composers like JS Bach where you can play the music on any instrument because the counterpoint is so tight, and others where that doesn’t work, and I was surprised to find that so much of this does. It’s interesting to compare them to Liszt’s transcriptions of the Beethoven symphonies: to me a lot of that just sounds like you’re just trying to fake something on the piano, which I find very frustrating. It’s wonderful to think about this collaboration between two generations of genius composers, but I don’t play them and can’t even listen to them: Glenn Gould’s recording is eccentric but it’s not really satisfying musically, whereas a lot of these genuinely feel like piano works, particularly if you didn’t know that they were symphonies in the first place. Hearing something like No. 75, which has only been recorded maybe a dozen times, is in itself going to be a new experience to a lot of people – it’s not like hearing the opening of Beethoven 5. And also the audiences aren’t necessarily the same: people who listen to the Haydn symphonies aren’t necessarily the same people who go to Wigmore Hall to hear Beethoven’s last three sonatas. I think there’s a misconception that everyone has the same breadth of knowledge, and it’s not true in reality.

Is there any evidence of direct contact between Haydn and Stegmann?

I found no proof of that, and I think that if there had been any communication then it would have left a trail of some sort - but Haydn died in 1809 and these were published in 1811, so maybe it was simply too late. Simrock, though, who was the same age as Stegmann and was a real mover and shaker, certainly knew Haydn: in fact he was one of the first publishers of his music. Transcription was much more common in the early nineteenth century than it is today: something like a third of Haydn’s compositions have been transcribed (some of them several times), and it was something that everyone was doing, so it was relatively common for arrangers and composers not to have any direct contact with one another.

How technically challenging are the arrangements – are the publications likely to have been aimed at the amateur market?

Although they’re pretty easy to sight-read because the textures are so transparent, they’re actually really hard to play as piano music. But one of the advantages is that at the piano you obviously don’t have the ensemble problems that you have with an orchestra – you can do sharp turns, you can play with phrasing, you can introduce a lot of light into the textures and colours because you’re the only person who has to stay on board. If you look at something like the outer movements of No. 44, there are orchestras (particularly historical performance orchestras) who can pull that off at the same sort of speed that’s possible on the piano, but not many dare to try - you get to a point where it gets a little bit dangerous and things can start to sound muddy, whereas at the piano you can achieve a real clarity. There’s a panache about some of these fast movements which demands a kind of virtuosity and flair that I think most amateurs wouldn’t have at their disposal. It’s a little like the later piano sonatas, all of which were written for very accomplished virtuosos.

Are there any clues in the music as to what sort of piano they were written for?

I’ve just visited a collection in Hamburg which has many instruments from this period, and I think it’s likely that it would have been a Brodmann or an Érard - something with single action that would allow you to articulate the repeated notes quickly and cleanly. This raised the question of whether I would record them on a period instrument or not, and I decided not – I am interested in old instruments and I have a few at home, but it’s not what I do, and when you’re used to the responsiveness of new pianos it’s very difficult to adjust your expectations. Of course the same question exists about the original symphonies: do you play them on gut strings or on modern instruments? But a lot of this music is very malleable. Take the theme from the slow movement of Symphony No. 44: when I first heard that it just never occurred to me that it would sound OK on the piano, but it actually sounds very much like some of the slow movements of Haydn sonatas. I think we all have expectations when it comes to these things, and I think a lot of people won’t even listen to this album because they just assume it will sound awkward, but so much of it actually sounds very pianistic.

Is there anything to suggest that they were ever played in public, and do you have plans to programme more of them in the future?

No, there's no record of any public performance – though I did come across a reference to the sheet-music in a musicological journal, which is really just a short PR blurb just basically saying ‘These are now available, so if you want them then run to Simrock!’. So that raises the question of whether or not they’d even been played in public before 2016 – it feels a little strange to have given the world premiere of pieces that were meant to be played privately, but they do work as concert-music. I’ve performed No. 44 a lot live, and I play the last movement of the Oxford Symphony quite a bit because people seem to love it, but I’m not planning to do a complete cycle at Wigmore Hall or anything like that! 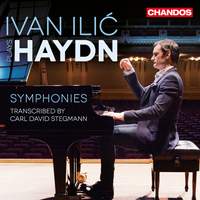