The beginning of June saw the release of an album that, for Howells devotees such as myself, seemed like Christmas had come early. The recording features the rarely-heard English Mass and richly-orchestrated versions of the iconic Collegium Regale Te Deum and Magnificat, but its crowning glory is a complete version of the Cello Concerto, an emotionally-charged work in which Howells seems to come to terms with the sudden death of his son Michael aged nine.

Hitherto existing in an incomplete form with the latter movements only sketched out, the concerto has been reconstructed by Jonathan Clinch's sensitive scholarship and brought to life by cellist Guy Johnston. I spoke to them both about this glorious album and the relationship between the different aspects of Howells's musical output.

Can you tell us a little about the process of expanding Howells’s sketches for the third movement? What principles did you set up to guide you in this work – and were there any particularly difficult musical decisions to make?

JC: I did my doctorate at Durham on Howells’s compositional technique and so I’d spent a lot of time considering his music material and forms. The Cello Concerto sketches were very interesting from that point of view and when I started working on them, it seemed obvious which pieces of the jigsaw went where. The pages were incorrectly numbered by Howells later in his life, so that didn’t help in the initial stages! The hardest decision was fixing the length – how much do you add? But his proportions in the exposition were quite clear. It’s really a concerto about parental grief and in that sense, it’s timeless: that’s what I wanted to share.

The results of your and Christopher Palmer’s musicological work are certainly convincing and musically compelling - but do you worry that completing works left unfinished (perhaps deliberately) by their composers risks taking you into tricky waters from the point of view of authorial intention and integrity?

JC: Initially I only worked on sketches to build up my own understanding of how he composed and this grew to the stage where I’d written a full orchestral score. Tony Payne gave me some very helpful feedback and, of course, I greatly admired his work on Elgar’s Third Symphony. Julian Lloyd Webber, who was Howells’s godson, was also very encouraging. Ultimately, I thought that people can always ignore the third movement, but you can’t play a concerto with only two out of three of the movements, so it was worth releasing. To be honest, I was very surprised by the whole mood of the finale – so much excitement and rhythmic energy overall. Given the context of Michael’s death, the finale that Howells was planning takes the whole work in a direction that no-one would expect (there’s a lot of Holst and Walton in there too).

How much of a musical connection is there between the concerto and the other main work on this album, the English Mass?

JC: Howells could never bear to stop working on a piece and often changed things, even when he was writing out a ‘neat’ copy. In the case of the Cello Concerto he worked at it for decades. The Missa Sabrinensis (the large-scale Severn Mass, for choir, soloists and orchestra) didn’t receive the critical reception Howells had hoped for, and I think the English Mass, which came the year after, was his ‘second attempt’. Certainly they’re all stylistically similar – this constant contrasting of lush rhapsodic music and then arresting declamatory writing, the agony and the ecstasy if you like. Howells viewed the cello as being the instrument closest to the human voice, and there’s some similarity in his long melodic lines for the cello and voices.

This concerto has been about eighty years in the making, and in the meantime Howells’s reputation has become firmly entrenched as a composer of Anglican church music; do you think the concerto could now help to shift the balance back in favour of his string works?

GJ: I always assumed Howells, who studied with Stanford and Parry, was primarily a choral composer. As a chorister, I used to sing some of his most well-known works - his anthems, Collegium Regale, Requiem, and the beautiful A Spotless Rose - at Kings. But when I found out I was going to be giving the premiere performance of this recently completed cello concerto (thanks to Christopher Palmer and Dr Jonathan Clinch), I made sure to familiarise myself with some of his other enchanting instrumental works such as his Viola Elegy, Piano Quartet and string quartets.

Howells’s concerto has a lyrical quality from the start, and much of the work is a personal lamentation of the loss of a beloved son, Michael. Like Elgar’s concerto, Moeran’s lesser-known concerto and David Matthews’s completion of Vaughan Williams’s single movement Dark Pastoral (I recorded the latter two works a few years ago), this concerto embodies a deep nostalgia and sense of loss.

I hope the concerto will be aired more often in the future, which may in turn challenge the common misconception of Howells as a choral composer exclusively.

The Howells we hear in this concerto is a very different musical voice to what might be familiar to fans of his great choral works; it must be an unusual challenge to approach a piece for which so few stylistic reference-points exist. Do you hear any other composers’ influences on Howells’s writing in this work?

GJ: I spoke with Dr Jonathan Clinch, who completed the final movement, about the various composer influences heard in the music of Howells. For example, one can hear parallels with Vaughan Williams’s Lark Ascending in the opening bars. Jonathan made me aware of a pivotal moment at the beginning of Howells’s career. In 1910, at the Gloucester Three Choirs Festival, Howells (who was an articled pupil of the organist there) met Vaughan Williams and Elgar for the first time. Vaughan Williams’s Fantasia on a theme by Thomas Tallis received its first performance and afterwards he came and sat in the audience in the seat right next to Howells. The rest of the concert was Elgar’s Dream of Gerontius, and Vaughan Williams shared his score with Howells. Years later Howells said that was the night he realised he had to be a composer. Jonathan mentions connections with Walton and Holst in relation to the last movement, and it may not be a coincidence that Howells writes the first movement in E minor, like Elgar’s concerto. Elgar talked to Howells several times about string writing (and took him horse-racing at Chepstow too); Howells also dedicated the slow movement of the Concerto for String Orchestra (1938) to the memory of both his son, Michael, and Elgar. So there are inevitably deep British roots inside the architecture of this music.

As a performer, Howells himself was primarily an organist. How idiomatic did you find his writing for the cello?

GJ: I had an opportunity to communicate with Moray Welsh about his experience of performing the first movement and recording it with the London Symphony Orchestra years ago. We both commented on what an attractive work it is - the first movement is incredibly large scale in comparison to the others - and also how well written it is for the cello.

I imagine Howells was drawn to writing for the cello because, as he said, it is the closest instrument to the human voice and, as well as communicating his own personal story through this voice, of course there are also parallels with his choral writing. There’s even an organ pedal at the end of the slow movement!

It was a great pleasure to work on this Concerto and to have recorded it with Christopher Seaman and the Britten Sinfonia in Kings Chapel, where I used to sing as a chorister in the 90s. Howells even had a picture of Kings Chapel, apparently one of his favourite buildings, on his wall at the Royal College of Music. Lots of things seemed to come together in a special way for this recording. Another bizarre coincidence was how the score came into my hands at Westminster Abbey, where Howells is buried. You can read more about this here. 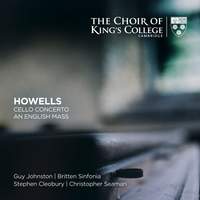