The career and style of Latvian composer Pēteris Vasks have followed a pattern similar to that of many of his Baltic contemporaries - an early interest in cutting-edge modernist techniques, a fractious relationship with the Soviet authorities, and a more recent turn towards sacred-leaning and more tonal works, often evoking the label of "minimalism".

In 2018 the three Baltic states celebrated their centenary of independence - all three count their "ages" as nations from 1918, when they seceded from the collapsing Russian Empire, and see the tumultuous liberations of the 1990s as a restoration rather than a new start. It's in this spirit of optimistic patriotism that Vasks has presented this new album of choral works as a "birthday present" to his home nation. Similarly to new musical expressions from other post-Soviet and ex-Warsaw-Pact regions, it draws both on repressed Christian traditions and on the texts of a national literary hero - here the dissident poet Imants Ziedonis. I spoke to Pēteris about his musical voice over the years, and how this fits with Latvia's own rediscovery of its national identity.

You mention in your interview with Dāvis Eņģelis the “timeless” nature of Latin text, and there are hints of Catholic styles of sacred music in your Latin Mass (some very Palestrina-like imitation in the Christe eleison). Isn’t it a little strange for someone from a Baptist background, writing in a heavily Lutheran country, to make such significant use of Latin?

In my music I have always tried to talk about what I call the 'spiritual vertical', both in instrumental and vocal works: I believe that the word that is sung has a double or even triple power. Therefore it's natural to me to combine my Baptist background in a Lutheran country with Latin liturgical text in order to tell about the existence of divine love.

Lūgšana mātei is earlier than most of the other works on this album, having been written (under a less religious title) during the 1970s when you were working in the closely-monitored environment of the Latvian SSR. How much do you feel your musical style has changed since then?

From a pretty harsh musical vocabulary in the beginning of 1970s I have come to a diatonic canto. My style has not changed due to external circumstances: I simply found my way in music, and that changed my musical language.

A number of contemporary composers from former Warsaw Pact nations seem to have been engaging in a rediscovery of not just national but also religious heritage since 1991 – Arvo Pärt, Paweł Łukaszewski and others. Do you see yourself as part of this trend?

I wouldn't describe it as 'rediscovery' as such, but rather as the result of these composers having cultivated, maintained and cherished their national and religious heritage for decades. Sure, I am a part of this trend - or, to be more precise, I am a part of the grand resistance movement that has helped us to survive.

Like some other composers from central and eastern Europe, you’ve drawn on the poetry of an icon of the movement for national liberation, Imants Ziedonis – a prayer for the flourishing of Latvia, written in the Latvian language which was suppressed under Russian rule. Would you call yourself a musical nationalist in the spirit of Sibelius, Smetana and others?

Smetana is probably one of the first, and Sibelius is the most brilliant icon of the nationalist movement in music, but there are plenty of similar composers in small European nations. The main source of inspiration for me is the nature of my homeland and the rich heritage of our folklore: all my works were composed in Latvia, living with my people’s joy and sorrow. Therefore you can certainly count me within this nationalist group.

In late 2018 Latvia celebrated the centenary of its first declaration of independence, though of course that independence was in practice interrupted by occupation. You’ve called this album a “gift” to Latvia on its birthday; do you think art and music played a particular part in keeping Latvia’s national spirit alive through the troubles of the twentieth century?

We are not many: roughly two million. In order to survive in the long decades of occupation (and today, in the ocean of globalization, the time of great changes in the twenty-first century), we all have to love, cultivate and develop our art, culture, and language. This is our gift to Latvia starting a new centenary. 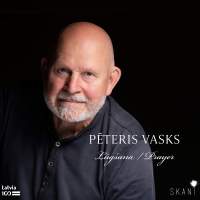 Lugsana/Prayer was released on SKANI on 22nd March.