Canadian-American violinist Leila Josefowicz has devoted a large part of her career to new music: her discography includes concertos by John Adams, Oliver Knussen, Colin Matthews and Esa-Pekka Salonen, and she’s worked closely with composers including Thomas Adès, Luca Francesconi and Steven Mackey. On her latest recording, though, she’s championing a work written in the 1950s by a composer whose centenary fell last year – and whom she describes as being ‘totally ahead of his time in so many ways’….

When was your first encounter with the concerto, or indeed with Zimmermann’s music in general?

It was around 2005 when I first heard about Die Soldaten and started listening to his music, and I was instantly very taken with his completely original style. His compositional training was in jazz, which he fused with different aspects of serialism and writing in a way that's unlike any other composer I've ever come across.

I was put in mind of Bernstein’s Symposium (which was composed four years after Zimmermann's concerto) in places – do you see any parallels with other works for violin and orchestra from the 1940s and 50s?

His sound is so truly unique that I’d go so far as to say that there actually isn't anyone that sounds like him! If you listen to something like West Side Story you realise that Zimmermann was very ahead of his time, especially when you bear in mind that his music was written for Germany: given that he was really entrenched in the German school of composition, I often wonder if this was an act of rebellion of sorts. I think very few people in North America are truly familiar with his music, though there's more awareness in Germany and certainly in England. I’ve really gone on a crusade with him: it’s a piece I feel very passionately about, and it’s so exciting to feel that I might be introducing people to this amazing composer.

Have you picked up any insights into Zimmermann's character and background in the course of that 'crusade'?

I know that religion was a very big part of his upbringing: he was brought up as a devout Catholic, and then to be put into a situation where he was fighting in a war where he felt that he was on the wrong side was, I think, something that really haunted him for the rest of his career. I’m quite good friends with his daughter, and that relationship has been a really big gift in my life: it’s wonderful to feel a family connection there, and she was telling me just in December (when I played his concerto in Köln) how warm and how funny a man he was. His writing became darker and darker, but there was also this sense of loving life and grabbing as much fun as he could possibly have. He loved parties and fun and fine dresses for his wife – these are all things that you wouldn’t necessarily know from the music itself, but it really gives a different dimension to my understanding of it. She wrote a book about him that’s recently been published in German, which is full of fascinating material - though unfortunately my own German’s a little lacking!

Do you think the perception that his music is dark or ‘difficult’ has contributed to its neglect?

I’m not even so sure that there’s any perception as such - people simply don’t know about him at all! He was a pupil of Stockhausen, but he was drafted in and out of the army during World War Two, so his development was quite unconventional and fractured: it was definitely tragic that he was born in a generation that really didn’t have a chance to flourish artistically. There's a certain existential dimension to a lot of his music from this period and immediately afterwards: I think composition was his outlet, his confession, his passion, and a means of expressing himself in extremely difficult circumstances. His experiences during the war affected his whole life (it's surely significant that his best-known work is an opera about a soldier): music became for him some kind of expressive tool of solace.

You've also been programming Zimmermann's Sonata for Solo Violin in recital a lot over the past year or so - how close a connection is there between the two works?

He wrote the Sonata before the Concerto, and the amazing thing is that the outer movements use exactly the same material. The Sonata is really a shorter and more condensed version of the Concerto - and I have to say I do prefer the Concerto, partly because of its use of the Dies Irae. That's not present at all in the Sonata, but it plays a constant role within the second movement of the concerto, which adds an uncanny quality and an almost existential sense of doom. So in some ways I’ve had double the study of these works by playing them in different formats, which has been extremely interesting. The Concerto really is one of the most memorable pieces I’ve heard, not only in the violin literature but in all of classical music.

Do you get any sense of Zimmermann having paved the way for any of the later twentieth-century composers you've worked with?

I would say that composers more than anyone else have known about him for some time, certainly if they’re interested in European music between 1950 and 1970, though I'm still not entirely sure how many of them know his music first-hand. But if there’s one work of his that’s been truly influential, it’s Die Soldaten, which has been performed all around the world and is one of the most important works of the late twentieth century: it achieved an almost cult status in the 1970s. He’s just had his birth-year centenary, and I think that's done a lot to raise awareness of him and his music: in a sense I think he's the best-kept secret that’s becoming less of a secret all the time! 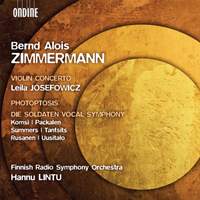