As part of our celebrations of the Britten centenary, Katherine spoke to the tenor James Gilchrist (widely acclaimed for his recordings of works including Albert Herring, Owen Wingrave, On this Island and the Seven Sonnets of Michelangelo) about recording the Serenade for Tenor, Horn and Strings with Dutch horn-player Jasper de Waal and the Amsterdam Sinfonietta, released on Channel Classics on 25th February. James discusses the pleasures and challenges of approaching this work without a conductor, his relationship with the legacy of Britten’s muse Peter Pears, and the hauntingly beautiful incomplete setting of Tennyson’s Now sleeps the crimson petal, which receives a rare outing on disc here. 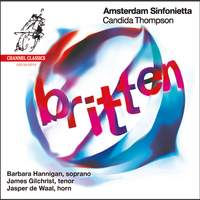 'Gilchrist’s Serenade, with Jasper de Waal the stupendous horn soloist, is one of the best things the English tenor has done on disc — Pears-like in its intensity and crystalline diction.' (The Sunday Times)