Recording of the Week,  Sublime Vivaldi from Nathalie Stutzmann

I’ve got a really special disc to tell you about this week. Nathalie Stutzmann’s new Vivaldi album was released in France a couple of months ago but it has had virtually zero coverage over here in the UK and I only came across it after a tip-off from a friend who runs the Classical CD department in Foyles book shop in London. It is a fabulous disc which reminds us that at a time where male castrati were at the heights of their powers (early eighteenth century) Vivaldi was one composer who actually preferred the female contralto voice. 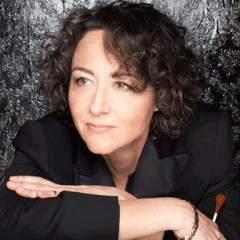 From his first opera (Ottone in villa) to his last (L’oracolo in Messenia), Vivaldi more often than not placed a women centre stage rather than a male castrato, and in many cases this lead female was assigned a male role. I guess that makes Vivaldi a bit of a pioneer of the so-called ‘trouser role’, which from Mozart’s time onwards became a fairly common practice. This may of course have been partly for financial reasons as Vivaldi was not well off, and castrati stars were far more costly than their female counterparts, but I don’t think that was the sole factor. The detailed booklet notes go into some detail on this issue and explain which arias on the disc were definitely written for female contraltos. Maybe it is just me but I think there is an extra depth of sincerity and tenderness in the female arias which maybe isn’t quite so apparent in the ones written for castrati, where versatility and coloratura are generally more apparent.

Natalie Stutzmann has a fabulously rich and dark contralto voice, with real power on the lower notes combined with a clarity of sound and diction that is so rarely found. The moods of the arias on this disc range from furious rage to calm meditation. There are probably more of the latter and she sings them with astonishing warmth and beauty. Her breath control and coloratura are impressive, while ornamentation is tasteful and not overdone.

She is superbly supported by Orfeo 55 – an ensemble which she founded in 2009 to fulfil a lifelong dream of having her own chamber orchestra. She gets an impressive sound from the orchestra with beautiful phrasing to match her singing and delicate pianissimos which create some really special moments.

It is a disc which I’ll be returning to many times in the future and along with Naïve’s continuing Vivaldi Edition (on which Natalie Stutzmann is a regular performer) will continue to bring awareness to Vivaldi as one of the great opera composers of his time.

There are sound samples and a short video (in French I’m afraid but with lots of musical examples) via the links below. I hope you’ll enjoy this as much as I have.