As regular readers may be aware, baroque music is a great source of joy in my life and though few composers give me so much of it as Vivaldi, I must admit that I’ve been on something of a Four Seasons sabbatical for a few years – these vividly programmatic concertos are among the most recorded works in the classical repertoire, and I’m sure I’m not alone in having come to associate their jaunty melodies with being assured (ad nauseam) that my call is important to Vodafone/British Gas/Virgin Media and that a representative will be with me shortly etc.

What a treat, then, to listen with fresh ears to Rachel Podger’s delightfully straightforward but unstintingly imaginative new recording with Brecon Baroque, which uses just eight musicians (single players on each string-part, plus a violonist, a theorbist and a keyboard-player doing double duty on harpsichord and chamber organ) to breathe affectionate new life into scores that have fallen victim to familiarity’s notorious tendency to breed contempt. It’s refreshing, too, these days, to hear these works as part of an all-Vivaldi album: most recent recordings have involved transcriptions or contemporary re-imaginings of the pieces alongside the originals, but Podger simply invites us to appreciate the radical inventiveness of Vivaldi’s music on its own terms and in the context of three lesser-known concertos which share the spirit (and traces of the melodic material) of The Seasons.

Podger’s approach is considerably more fine-boned than most, which is as much down to the choices about phrasing, tempi and articulation as it is to the forces deployed: Spring is ushered in with gentleness and grace, at a slightly more sedate pace than usual and with almost courtly emphasis on legato rather than the rustic muscular bow-strokes which characterise many rival recordings. I’m of an age where Nigel Kennedy’s multi-million-selling recording in the late 1980s was storming up the charts just I was coming to the realisation that music was to be the primary driving-force in my own life: those brightly-coloured, almost psychedelic readings are hard-wired into my musical DNA, and experiencing Podger’s subtler but still vivid palette of colours in their wake is akin to walking into a room of Tintorettos after emerging from a Warhol exhibition.

The impact of using single strings registers early on, thanks to the avian interplay in the first movement of Spring, where Vivaldi calls up two lone violinists from the ranks to exchange imitation bird-calls with the soloist – often this moment feels as if we’ve briefly slipped into a concerto grosso, but here (and indeed at numerous points throughout) the effect is more akin to a sonata da camera. This is The Seasons as chamber-music rather than virtuoso war-horse, and the synergy between Podger and her tiny band is matchless: there were various moments where I had to dig out my score to make sure that the soloist wasn’t double-stopping rather than playing in thirds with the ‘tutti’ first violins, and they embrace the potential for liberal use of rubato to the max, so that much of the music has the freedom of a solo cadenza even when the full ensemble is playing. But the drama never feels short-changed: the sirocco storm of Summer whips up out of nowhere with scorching savageness, and the imaginative continuo-playing at the close of Winter had me checking the booklet-note to make sure there wasn’t a wind-machine and thunder-sheet somewhere in the mix!

Autumn (my favourite Season when it comes to Vivaldi and life in general) is a special delight here: rather than the usual riotous bucolic knees-up, the boozy post-harvest revels come across as an after-work gathering among a few close friends that spirals from ‘just a quick one on the way home’ to the stage where Podger’s charmingly tipsy raconteur starts embarking on rambling flamboyant anecdotes and losing her thread mid-way (the audible wobble just before the life and soul of the party falls asleep on the pub table is delicious).

I’ll be talking to Rachel about the recording later today, so do stay tuned for her personal insights on a project that’s clearly been a labour of love and friendship. 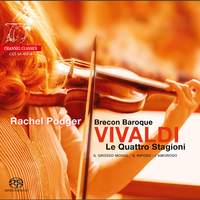