For her debut solo recording (out now on BIS), the Norwegian violinist Eldbjørg Hemsing pairs Shostakovich’s Violin Concerto No. 1 with a very different (and far less familiar) work: the lush 1914 Violin Concerto by composer and music-journalist Hjalmar Borgstrøm, who initially studied in Oslo with his compatriot Johan Svendsen but went on to pursue a consciously Germanic style after spending time in Leipzig and Berlin.

I spoke to her recently about why this attractively lyrical work has fallen off the radar, where it sits in relation to other early twentieth-century concertos, and her immediate plans for further recordings…

The Borgstrøm concerto is a real curiosity - how did you come across it in the first place?

It was a bit of a chance encounter, really: a family friend sent a pile of sheet-music to my home in London which included the score, and I set it to one side for a while but when I started to go through it in detail I was really intrigued because it’s just so beautiful. It had only ever been performed twice (in Norway), so essentially it was completely forgotten: no-one knew about this piece, and I think it's a great discovery!

Do you have any theories as to why his music never really entered the repertoire?

There are several factors, I think. First of all it’s because Borgstrøm was a little bit behind the curve in many ways: his timing was not the best! He was composing in this late Romantic style at a time when people were already branching out and moving away from that; of course there had been Grieg, who spent a lot of time travelling around and using folk-music in a very different way from Borgstrøm, who was much more interested in Romantic ideals. He spent a total of fifteen years in Germany, initially studying in Leipzig and then living in Berlin for many years - but by the time this concerto was premiered in 1914, World War One had broken out and in Norway it was considered almost improper to continue in this very German musical tradition. He also composed quite a few symphonic poems, an opera and some piano music, but I haven’t been able to find out very much about them because there aren’t that many studies in print!

You pair the Borgstrøm with Shostakovich's First Violin Concerto - what was the thought-process behind the coupling?

When the offer came to make my first recording I knew I wanted to include the Shostakovich – I studied the piece from a very young age and have performed it a great deal. It’s painfully emotional and really dark: you’re really pushed to the limit of what you can express as a human being, and I thought that with a piece like that you need something that’s very much a contrast. I wanted something that was the complete opposite, something much more lyrical and ‘white’ in sound, something Romantic…and the Borgstrøm seemed to fit the bill perfectly, particularly because people don’t know it!

Are there any other Norwegian concertos that you’d like to bring back to life - Sinding, for instance?

I used to believe that if something wasn’t performed very often there was probably a reason for it (ie that that quality wasn’t good enough!) but I have to say that since discovering Borgstrøm I’ve actually become very curious about what there is out there, so I definitely would like to go on a journey to see what else I might find…!

Given that many listeners will be new to this work, could you point us in the direction of one or two personal highlights in the piece?

I think there’s a particularly special moment in the first movement: there’s quite a long introduction before you come to the first melody, which initially comes in the strings, and it’s very pure and lyrical and tender. And the second movement is my favourite in many ways – it’s like an operatic aria, and it reminds me of something but I can’t quite put my finger on what…It’s very familiar in a sense, but at the same time it has its own very individual sound.

Do you see any parallels with other violin concertos which were written at around the same time? I hear echoes of the Sibelius concerto here and there...

Yes, there’s definitely something similar about both the melodies and the chords - the Sibelius concerto was written 10 years prior to this, so it’s not unlikely that Borgstrøm knew it! But there’s also an operatic quality to the work that reminds me of Wagner in places…

What are your immediate plans on the recording front?

I’m about to start recording with the Oslo Philharmonic and Tan Dun, whom I first met eight years ago. We’ve done a lot of projects together, and this one includes one brand-new concerto and some other smaller pieces.

And the two of you share a passionate interest in the folk music of your respective countries...

Indeed. I started playing the violin when I was very young and I also studied the Hardanger fiddle alongside it, because the area where I come from is very rich in folk-music; I've continued to play both instruments and I try to make sure that every year I do some projects which include folk music because I think it’s very important to keep it fresh and alive. 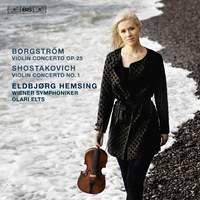