As readers of last week's newsletter will be aware, Thomas Hampson's Tides of Life (in which the American baritone joins forces with the Amsterdam Sinfonietta in lieder by Wolf, Schumann, Brahms and Schubert, arranged for voice and string ensemble by David Matthews) has been receiving a significant amount of air-time in the Presto editorial office over the past month; in my review of the disc last Friday, I promised an interview with the man himself, and here it is! We're very grateful to Mr Hampson for taking time out of rehearsals for La traviata at the Met (which opens tomorrow, with Sonya Yoncheva and Michael Fabiano as Violetta and Alfredo) to talk to us about his long-term friendship with the Amsterdam players, the themes at the heart of the programme and the pleasures of revisiting these songs in their new 'clothing'!

How did you settle on which songs to have arranged? Did you have a particular theme in mind for the disc, or was it more a case of the piano parts of these particular songs leaping out as being especially suitable for strings?

I’m happy to say that the collaboration with the Amsterdam Sinfonietta on all of our projects is one of mutual fascination, trust, and unencumbered collaboration. At the outset, the Brahms songs, and the Barber string quartet/string ensemble were the givens. As we decided to do a large group of Schubert and Wolf songs, my concentration was particularly on variety of moods, however in a kind of wondering reflective atmosphere, and of course a musical and poetic agogik that I felt particularly enhanced by a string ensemble versus piano. We came up with the title of the album much later, but in retrospect it would seem that our mutual desire for this project was one of embracing life’s myriad moments of reflection, whether profound, euphoric, or simply observational.

Following on from that, was it a deliberate decision to include songs which make references to strings and string-players: Der Rattenfänger and An die Leier?

It was not a conscious decision, but an interesting observation on your part. It certainly didn’t hurt, and probably was not lost on our public.

What was behind the decision to add upper voices to Ständchen (one of our favourite tracks in the Presto office!)?

The inclusion of the girls’ choir for the Schubert extension came from a concert we did at the Concertgebouw for their sponsors and patrons and specifically celebrating youth in music. Simon Reinink, the director of the Concertgebouw, had the idea to invite this marvelous choir, and as I was asked about the piece I was glad to confirm I had sung it with the Vienna boys’ choir at one time and found it a wonderful idea for a young girls’ choir. That we later included them in a couple of our public programs and added them to our CD project just seemed a very natural and wonderful idea. I’m glad you liked it.

My colleagues and I caught occasional echoes of the string-writing of later composers whilst listening (shades of Britten’s Simple Symphony here and Tchaikovsky’s Serenade for Strings there etc) – did you get a similar sense of 'happy anachronism' in any of the arrangements, or did you feel that they were largely in keeping with the styles of the original composers?

Perhaps these connections were not lost on Candida, but they were admittedly not in my mind as we set the repertoire. I did however feel that the string arrangements very much caught the style of the musical language of each individual composer on the program, not in any anachronistic way, but in fact in so many ways illuminating a richer experience to the text itself.

Tell me a little about your relationship with David Matthews: how did he come to be involved, and how much communication and input did you have whilst he was working on the arrangements?

I’m happy to say that the decision to ask David Matthews as arranger for our project was the brilliant foresight of the Amsterdam Sinfonietta itself. I of course have known of David Matthews’ work for many years, especially in the world of Mahler, and was thrilled to learn of his commitment to our tour.

Did either you or Candida Thompson ‘direct’ the ensemble, or did you approach the performances and recording more in the spirit of chamber-music?

Well, this is very much a chamber music project, isn’t it? And in fact that’s one of the great thrills for me as a singer, to work with such a talented group of musicians in a kind of richer one on one experience than just with a normal orchestra. There is no question that in vocal music, the actual “phraseology” is centered first and foremost on the syntax of the language. Ergo that intent, meaning "interpretation". 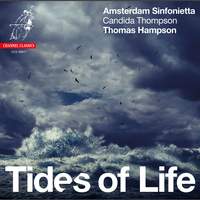 Tides of Life: Arrangements for string ensemble and baritone by David Matthews