Few living classical composers are as well-known as John Rutter - blessed with a gift for natural, memorable melodies, he's been a firm favourite with choirs and choral societies all over the English-speaking world and beyond for decades.

His latest work is both different and familiar - while retaining the choral element that has dominated his compositional output, at heart it is actually a violin concerto. A paradox? Maybe. I caught up with John last week to try to square the circle…

For many people, your reputation rests heavily on your talent at writing appealing, relatively small-scale anthems and similar pieces. Visions is your first new large-scale piece for some time – and its format as a violin concerto with choir is pretty unique. How different did you find the process of writing a piece like this?

Actually, Visions isn't my first large-scale piece for some time - last year I wrote The Gift of Life, a 40-minute choral work - but its format is certainly different from anything I have done before. I enjoyed the adventure of combining a solo violin and chamber orchestra with a boys' choir, and the fact that Visions was to be premiered in the Temple Church in London, one of my favourite sacred spaces, was a big incentive.

How did you approach the idea of combining the soloist and the upper-voice choir, in terms of their respective roles in the music and how they interact with each other?

At first, I had thought that the boys' choir would preface each movement and drop out once the solo violin started, but once I began writing I realised that they could interweave and spark each other off. For much of the 20-minute span of the piece, there's a dialogue going on between violin and voices.

You mention that this work was written to be performed by Menuhin Competition winner Kerson Leong, and that you went to considerable lengths to ensure he was the soloist on this recording. Did you have any aspects of his particular playing style in mind when composing the solo part?

As with any piece written for a specific performer, the composer tries to become familiar with that performer's style. I wasn't able to meet Kerson Leong in the flesh before I wrote for him, but I listened to recordings of him (there are not many, he is only 19) and I was deeply impressed not just with his formidable technique but equally with his beautiful range of tone colours and his thoughtful expressiveness. I sent him his solo part, asking if there was anything he wanted changed, and the answer was 'not one note of it', which was encouraging - then when we finally met in London for rehearsals, I was amazed at his insight into all the nuances I wanted but which are hard to put on paper. He just seemed to get inside my head, and I had almost nothing to say in rehearsal. The first performance was magnificent, and when the time came for the recording, it was more than just a courtesy to invite him to play - he absolutely had to be the soloist, and with much juggling of schedules we all got together in July and he repeated the miracle.

The other item on this album is a re-recording of your Requiem, three decades after the original. Aside from improvements in recording technology over this period, has your approach to the music itself changed? Do you think the new generation of Cambridge Singers make something substantially different of this work?

My wife has a theory that composers need time to get to know their own works, and once they have, they conduct them better, and probably faster because they don't need so long to take it all in. When I originally recorded my Requiem, it was very new and had never been performed in the UK. Now, I have conducted it in many countries, probably well over 200 times and inevitably I hear it differently.

In the new recording there are colorations of tone which I think are different, inflections in the text which were not so clear before, and a choir whose members probably all know the piece already and aren't trying to grasp something they have never heard before. Oddly, I don't think the tempos have changed much. Above all I felt it would be nice to give a new generation of Cambridge Singers a chance to see what they could make of a piece recorded so long ago by their predecessors - and I thoroughly enjoyed the second chance for myself as conductor. 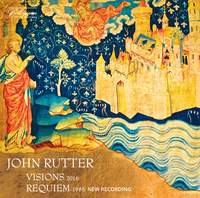 Visions - featuring Kerson Leong, the Temple Church Boys' Choir, the Cambridge Singers and the Aurora Orchestra, all conducted by John Rutter - was released at the end of October, on Collegium. 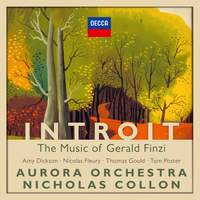 Introit: The Music of Gerald Finzi 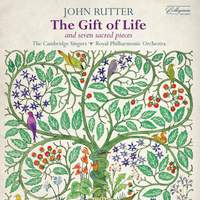 Rutter: The Gift of Life

John Rutter's The Gift of Life is a large-scale choral celebration of life and creation in all its variety - performed here by the Cambridge Singers and the Royal Philharmonic Orchestra, under the composer's baton.