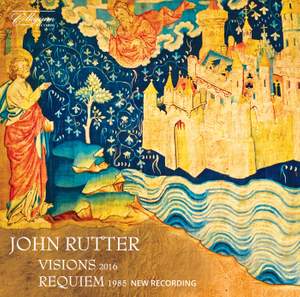 The tone of Visions is often lingeringly elegiac, and may well surprise those who associate Rutter primarily with facile tunefulness and chirpy carols…the recording [of the Requiem] has greater... — BBC Music Magazine, March 2017, 4 out of 5 stars More…

I. Jerusalem the blessed

Out of the deep

The Lord is my Shepherd

John Rutter’s latest major work Visions is a four-movement showpiece for solo violin, string orchestra, harp, and choir of treble voices, based on the theme of Jerusalem, the Holy City of prophetic imaginations. It was composed at the invitation of the 2016 Menuhin Competition and premiéred at a Festival concert in London’s historic Temple Church by Kerson Leong, winner of the 2010 Junior Menuhin Prize, and the Choristers of the Temple Church. They are joined by the Cambridge Singers and the young and vibrant Aurora Orchestra.

Rutter’s Requiem has enjoyed immense popularity since its premiere recording in 1986. 30 years on, John Rutter takes advantage of advances in recording technology to revisit the work with a new generation of Cambridge Singers.

The tone of Visions is often lingeringly elegiac, and may well surprise those who associate Rutter primarily with facile tunefulness and chirpy carols…the recording [of the Requiem] has greater clarity and amplitude, and both the singing and playing have a touch more incisiveness and assurance. In Alice Halstead Rutter continues to favour a soprano with the timbre of a boy treble, and her solos have an innocent fragility which is touching

The Cambridge Singers and Aurora Orchestra deliver a luminescent performance of a modern classic.