It seems incredible that this is René Jacobs’ first recording of Bach’s St John Passion, but it is – following a critically-acclaimed Matthew, and forming a diptych with it in terms of style and approach. Many of the same singers used there reappear here – Werner Güra is once again a convincing and natural Evangelist and Johannes Weisser reprises his role as Christus (also taking on the bass solo arias). 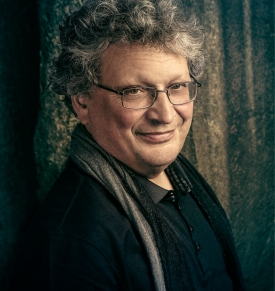 The opening orchestral ritornello is much more subdued than we’ve become used to recently. It seems to be a fashion among historically-informed performers to use those turbulent, churning semiquavers as a cue for a brisk, angry style, whereas here Jacobs takes the speed down a notch and brings the mood more into line with the sombre opening of the Matthew – only bringing the dynamic up to forte a few bars before the chorus’ first entry. From the point of view of the text, both approaches have merit – but I do like Jacobs’ a lot, and it shows that he’s thought about dynamics and mood carefully in preparing this performance.

Indeed it seems rather as if Jacobs has taken every traditionally-loud chorus – the opening, the turba sections and so on – and, for each one, carefully reconsidered whether that boisterous dynamic is actually justified. In some cases it’s clearly indispensable – the crowd’s shouts of “Kreuzige” could not be anything but forceful – but in some others a quieter dynamic works wonders. “Wir haben ein Gesetz” and “Lässest du diesen los” begin quite quietly, and the effect is almost sinister.

Couple this with Jacobs’ intelligent and authentic use of small choral forces and some easily-missed nuances of the drama begin to emerge – there are different sizes and different compositions of crowd, not just a one-size-fits-all choral sound. For the turbas, the chamber-choir sound underlines exactly who is speaking and who is not. Jacobs’ scoring, informed by Bach’s own notes about the necessary forces, makes it clear that the chief priests and other ringleaders of the plot are the guilty parties, not – as sometimes alleged by those seeking to accuse Bach of anti-Semitism in his music – the whole Jewish people. By contrast, the chorales (and the flanking choral movements, similar in mood) are fully “congregational”, drawing on the full forces of the RIAS Chamber Choir as well as extra singers from Berlin Cathedral.

Even more than this, at several points Jacobs draws on Bach’s practice of using “concertist” and “ripienist” singers, cutting down to just the four soloists in places. Sometimes this is purely for textural contrast, as in the middle section of the opening chorus; elsewhere it is, again, a sensible reflection of serious thought about the numbers involved. The soldiers who gamble for Jesus’ clothing make much more sense as a small detail of four soloists than they do as a vast choral platoon – so that’s exactly what Jacobs does, and it sounds completely natural.

While we’re talking about things being natural – the exchanges between Jesus, Pilate and the crowd bear mentioning. These can often seem very stilted and stylised, especially with the narrative interruptions of the Evangelist (“Jesus antwortete…”) constantly getting in the way of the argument. Jacobs surmounts this obstacle as far as possible – the soloists’ entries pile in one after the other with dizzying speed, especially in the first “trial” scene, and it has the effect of cranking up the dramatic tension without the need to make the recitatives any louder or more forceful. The delivery is almost closer to that of a play – and of course we’re never far from the Passion Play tradition in these settings of the Crucifixion narrative.

An immediate, natural-feeling Passion, then – no showy heroics or histrionics from Jacobs, who has sometimes been known to push the boat out and court controversy in his operatic productions. Here he simply offers a well-thought-out, intelligently-paced and balanced re-telling of the story, clearly and committedly performed, allowing the music and the theology to assume centre stage. 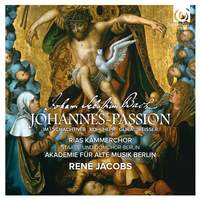