Arnold Schoenberg’s epic cantata, Gurrelieder, tells the tale of a Danish king, Waldemar, who curses God after his beloved Tove is killed. He summons an army of vassals from their graves, but with the coming of dawn they are defeated, and in a glorious chorus which concludes the work, the lovers are finally reunited and transfigured in death. With its massive orchestral and choral requirements, it is performed relatively rarely, and so this new recording from Markus Stenz and the Gürzenich-Orchester Köln is most welcome.

It's a fairly early work, steeped in late-Romanticism, in a similar vein to pieces such as Verklärte Nacht and Pelleas und Melisande. It's most certainly Wagnerian in flavour: many passages sound as if they could have come straight out of Tristan or Götterdämmerung. You’ll get some idea of the scale if I tell you that six separate choirs were involved on this recording, as well as an orchestra of over 140 players, including eight flutes, ten horns, seven trombones of various sizes, and some rather unusual visitors to the percussion section which I shall mention later!

With Wagnerian music come Wagnerian voices: the two main roles of Waldemar and Tove are especially demanding. The star of the set is undoubtedly tenor Brandon Jovanovich as Waldemar; his baritonal timbre suits the piece well, particularly the relatively low writing given to him for his first entry, but his top notes ring when necessary, such as the high B at the climax of the ‘Ross! Mein Ross!’ song. His rage in Part Two as he rails against God for allowing Tove to die is an arresting moment, helped in no small measure by some fantastic playing from the Cologne brass, who perform with enormous bite and menace.

Barbara Haveman sings the role of Tove with great pathos and beauty. Her final song ('Du sendest mir ein Liebesblick'), in which she assures Waldemar that death is merely a portal to eternity together, is radiant, accompanied by some ravishing string playing. I shouldn’t leave out the smaller roles either: The Wood Dove only has one song in the piece, a 12-minute section at the end of Part One (‘Tauben von Gurre!’), but it’s always a highlight of any performance for me. Stenz builds the tension gradually, pacing the relentless tread of the orchestra just right, until the powerful voice of Claudia Mahnke finally reveals the news to Waldemar: Tove is dead.

One of the more thrilling sections comes in Part Three: Waldemar has commanded his noblemen to rise from their graves and ride to the city of Gurre on horseback to seek revenge. A peasant (sung with gravitas by baritone Thomas Bauer) tells of the coffin lids rattling and clattering as the tombs open, before a 12-part men's chorus is unleashed. It's imaginatively realised by Schoenberg: in the percussion he calls not only for a ratchet but also “some large iron chains”, which are to be shaken and rattled to represent the raising of the dead.

The orchestral parts throughout are incredibly demanding - there's a notorious passage for the woodwind section towards the end entitled Des Sommerwindes wilde Jagd (The Wild Hunt of the Summer Wind). In a manner reminiscent of the opening of Mahler's First Symphony, the woodwind are required to sit on bare octaves high in their register. It requires expert dovetailing from the four piccolos, two of whom are holding long top Bs, and so the potential for excruciating intonation is immense. Not here though - the Cologne woodwind are on top form, as indeed is everyone in this fine new recording of a wonderfully colourful and dramatic piece. 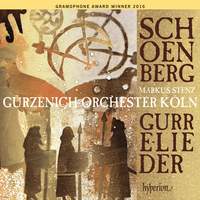