Recording of the Week,  Brahms Serenades from Riccardo Chailly

Back in October 2013, I wrote about a new set of Brahms’s symphonies from Riccardo Chailly and the Gewandhausorchester, and I remember the fresh approach that Chailly brought to this music, with brisk tempos, a firm lack of stodginess, and some excellent playing. I clearly wasn’t the only person to be impressed with the performances, as the set ended up being awarded Record of the Year at the 2014 Gramophone Awards! 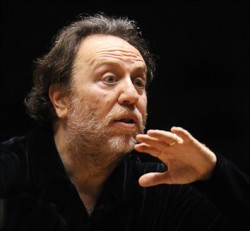 Chailly and his Leipzig players have now followed up this impressive set with a new disc of the two Serenades. Both pieces are relatively youthful works, written when Brahms was in his twenties, and are some of his earliest attempts at orchestral writing. Far from being mere trifles, though, the works contain some passages that are technically very demanding (indeed, the second Serenade was almost the cause of the disintegration of the Vienna Philharmonic, as many of the players attempted a mutiny, initially refusing to perform the score, complaining about having to spend so much effort on such a difficult piece by a then-unknown composer!)

Furthermore, they are completely fascinating to listen to, as I think you can already hear the beginnings of Brahms's distinctive compositional voice, and there are some interesting choices in terms of orchestration (for instance, there are no violins in the second Serenade).

Chailly brings a completely charming rustic swagger to the very opening of the first Serenade, with a kind of peasant-dance lilt, accentuated by some characterful playing from the horns in particular, as well as the bucolic clarinets and bassoon in the series of minuets later on in the piece.

That's not to say there's any lack of refinement: there's some beautifully expressive playing from the violins in the second of the minuets, with a searching theme that Chailly shapes wonderfully. Similarly the Adagio non troppo movements of both this and the second Serenade show off the players' capabilities to the full: eloquently tender one moment, and stormily dramatic the next.

I think these pieces also contain some of Brahms's most joyous music, and the players seem to revel in this; in the last movement of the A major Serenade especially there's an infectious liveliness that puts a smile on one's face, aided in no small measure by a delightfully chirpy contribution from the piccolo.

While I haven’t actually totted up the number of available recordings of these pieces, it seems to me that they are perhaps not as frequently recorded or performed as Brahms’s other orchestral works, and so I was especially pleased to hear this disc. As I listened, I kept thinking that it's such a shame that they aren't heard more often, as it's clear what wonderful music they contain, especially in such convincing performances as these. It's difficult to think of performers who are more at home in this kind of music than Chailly and the Gewandhausorchester: enchanting from start to finish! 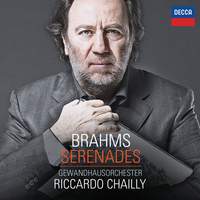