The Elias Quartet began making their presence felt in the late 2000s, winning a series of awards including the BBC's "Newcomer of the Year" for a live-recorded recital of Mendelssohn, Mozart and Schubert.

Their latest project should certainly cement their reputation as one of today's leading quartets - a complete series of Beethoven's string quartets at the Wigmore Hall, all recorded live and released as-is on disc!

Members of the Quartet were kind enough to offer some thoughts on this ambitious, and in many ways daunting, undertaking.

How did the idea of doing a complete Beethoven cycle originate, and when? Has it been on the cards for some time, or did it only really become possible with the recent support of the Borletti-Buitoni Trust?

I think presenting a Beethoven cycle must be every quartet's dream. His pieces are a sort of bible of the string quartet repertoire and they work fantastically as a cycle.

Ever since we started playing together, I think we always had some sort of unspoken agreement that we would one day want to do one, so when it came to presenting a specific project to the Borletti-Buitoni Trust in 2010, we immediately thought the time had come! But it was really their support that enabled us to imagine and build the website, and make the whole project about more than performing the quartets. And promoters and audiences around the country really responded to this and joined in, making our project their own.

The “multimedia” side of this project is clearly a big element – the specially-devoted website with blogs, features and analyses from both audience members and yourselves. Do you think this sort of peripheral content is, or should be, an integral part of major musical projects in the digital age – or does it risk getting in the way of the music itself?

It's difficult to set up any general rules or recommendations, but we thought a dedicated website would fit this specific project of ours since it was to last for a limited time and cover a certain body of work. We have tried our very best not to make our Beethoven Project website a gimmick by trying to add as much serious content as possible. Some articles and blog posts are lighter in character but others are really rather dense and take time to read. But there certainly is a risk with digital ventures like these when you try to bring in a new audience who perhaps hasn't heard Beethoven quartets before, but you want to keep the interest of the seasoned part of the audience who often is extremely knowledgeable.

Why did you choose these particular quartets (one early, one middle, one late, plus the Große Fuge) for the first volume – rather than, say, simply going through the whole corpus in chronological order?

The recordings are taken entirely from live concerts at Wigmore Hall, so each volume will be released exactly as it was in concert. The format was 6 concerts, all with an early, middle and late period quartet. When we first planned the cycle we sought advice and loved the way The Lindsay Quartet had done it. We knew we wanted to play Opus 130 twice, once with the Grosse Fuge and once with the later finale. We were also keen to include the String Quintet as it is such a magnificent piece and not played very often. The Lindsay's cycle had both these options so seemed the perfect fit.

To record all of Beethoven’s string quartets is a big enough task in itself, but to do so live is almost unprecedented! What made you go down this route rather than staying in the relative safety of the recording studio?

We had a Beethoven cycle planned at Wigmore Hall, who then asked us if we'd be interested in recording that cycle live for their label. At that point we hadn't even thought about recording the cycle! But we realised that doing it live, despite it being incredibly stressful on the concert days, was actually less daunting than going into the studio. With recording live it's easier to get away from the idea of the "perfect" or "definitive" version, it's really what happens at that moment in time. There's also something about recording in the studio that is very far from the feeling of a performance, recording live is much more natural and real, if one can forget about the mikes! And of course, it is such a rare and unique chance, not least because Wigmore is one of our favourite halls to play in, and we feel very lucky and thankful to John Gilhooly for giving us this wonderful opportunity.

Selected recordings by the Elias Quartet 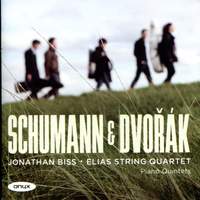 Also part of their hat-trick of Gramophone Editor's Choices is the Quartet's debut disc on Onyx: they were joined by Jonathan Biss for two great piano quintets in 'playing of wonderful exuberance' (The Observer).