Recording of the Week,  Schütz's Legacy

In the early 1660s, Schütz, relegated among the faded glories of the Dresden court, began to prepare for his own death. He embarked on a setting of all 176 verses of Psalm 119, a summing-up of the Old and New Testaments, without necessarily expecting the resulting work to be performed: it was to be his swansong or Schwanengesang. Ten years later, and aged 86, this Opus ultimum had evolved into 11 motets for double choir.

However, the manuscripts were dispersed after his death and it was to be another three centuries before the work was reconstructed and then sung. In 1900 during a clear-out in the town church of Guben (now Gubin, Poland), six manuscript books from a set of 8-part motets for double choir by Schütz were found. These were works whose existence had until then been known only from old documents. A second windfall occurred in 1930, when the lost continuo part turned up in the antiquarian book trade and was bought by Stefan Zweig. The Guben parts disappeared during the war and did not resurface until the mid-1970s, when Dresden musicologist Wolfram Steude relocated them. Thus a second chance was offered to preserve this collection of works permanently for posterity by means of a scientific critical edition. This was done and subsequently some three hundred years after being written the set was given probably its first ever performance.

That was I suppose about 20-30 years ago but, despite the importance of this work amongst both Schütz’s output and indeed the whole history of seventeenth century German music, it has yet to establish itself as the important and remarkable work which it undoubtedly is.

Herreweghe’s pioneering new recording with his Collegium Vocale Gent reveals the epic in all its glory. Beautifully sung and superbly recorded, the 11 motets resound with exultant double-choir hosannas, and the brass and viols of Concerto Palatino lace the polyphony with colour. Very highly recommended. 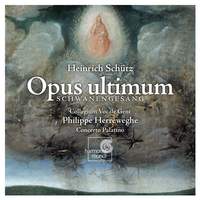