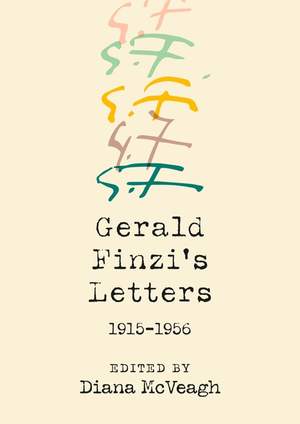 Gerald Finzi's (1901-1956) masterpiece is the radiant and touching cantata Dies Natalis. He is also highly regarded for his Thomas Hardy song-settings, for his Intimations of Immortality, and for his fine cello and clarinet concertos. As a scholar, he championed the then neglected composers Hubert Parry and Ivor Gurney, and for the eighteenth-century John Stanley, William Boyce and Richard Mudge, composers he revived with the amateur orchestra he founded.
Diana McVeagh, Finzi's biographer, brings together more than 1600 letters from and to Gerald Finzi, spanning the composer's life from the early 1920s until his untimely death in 1956. His more than 160 correspondents include Ralph Vaughan Williams, Herbert Howells, Edmund Rubbra, Arthur Bliss and Howard Ferguson, Michael Tippett, Benjamin Britten and Sir John Barbirolli, the poet Edmund Blunden, and the artist John Aldridge, making this a portrait not only of Gerald Finzi but also of his group of composer, musicians and artists friends that impacted British musical life in the first half of the twentieth century.
In these mostly unpublished letters Finzi emerges as a multi-faceted and complex character, developing from a solitary, introverted youth into a man with strong views and wide interests: education, pacifism, vegetarianism, the Arts and Crafts movement and the English pastoral tradition, among others. From amusing trivia to the deeply serious ideas and principles Finzi set out at the onset of war and in the 1950s, these letters allow for first-hand insights into his personality and background. This definitive edition is fully annotated, offering context with substantial commentaries on the correspondence, illustrations by Joy Finzi, a chronology, bibliography and a catalogue of works.

DIANA MCVEAGH is a Vice-President of the Elgar Society. Her interests range from Josquin to Birtwistle, but she writes mostly about English Romantics. She is the author of Elgar: His Life and Music (Dent, 1955), and the highly acclaimed Gerald Finzi: His Life and Music (Boydell, 2005 and 2010), and Elgar: The Music Maker (Boydell, 2007). She has contributed to the New Grove (1980, 2001) and the Dictionary of National Biography.