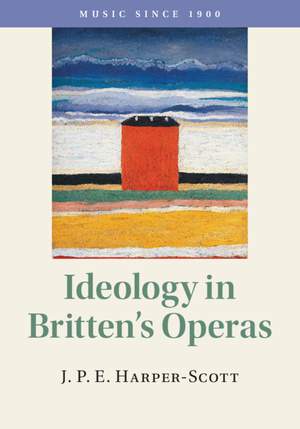 The author is interested in Britten's ideology and studies this by focusing on the origins, nature, and structure of the ideas in the operas. Recommended. Graduate students, researchers, faculty,... — Choice More…

This thematic examination of Britten's operas focuses on the way that ideology is presented on stage. To watch or listen is to engage with a vivid artistic testament to the ideological world of mid-twentieth-century Britain. But it is more than that, too, because in many ways Britten's operas continue to proffer a diagnosis of certain unresolved problems in our own time. Only rarely, as in Peter Grimes, which shows the violence inherent in all forms of social and psychological identification, does Britten unmistakably call into question fundamental precepts of his contemporary ideology. This has not, however, prevented some writers from romanticizing Britten as a quiet revolutionary. This book argues, in contrast, that his operas, and some interpretations of them, have obscured a greater social and philosophical complicity that it is timely - if at the same time uncomfortable - for his early twenty-first-century audiences to address.

The author is interested in Britten's ideology and studies this by focusing on the origins, nature, and structure of the ideas in the operas. Recommended. Graduate students, researchers, faculty, professionals

deeply original and brilliantly wrought ... Ideology in Britten's Operas is an intellectually stimulating achievement-agile in critical-theoretical perspective, musical in its score analyses, and engaging to read. It is also an ambitious book, seeking in Britten's operas a testing-ground for a broader ideologically framed criticism