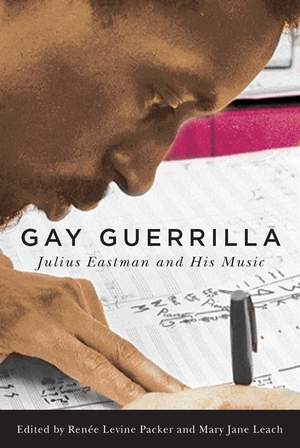 Julius Eastman enjoyed the admiration of peers such as Morton Feldman, Meredith Monk and Pierre Boulez. Here, highly engaging essays by those who knew Eastman well recall him as a person and... — BBC Music Magazine More…

Composer-performer Julius Eastman (1940-90) was an enigma, both comfortable and uncomfortable in the many worlds he inhabited: black, white, gay, straight, classical music, disco, academia, and downtown New York. His music, insistent and straightforward, resists labels and seethes with a tension that resonates with musicians, scholars, and audiences today. Eastman's provocative titles, including Gay Guerrilla, Evil Nigger, Crazy Nigger, and others, assault us with his obsessions. Eastman tested limits with his political aggressiveness, as reflected in legendary scandals like his June 1975 performance of John Cage's Song Books, which featured homoerotic interjections, and the uproar over his titles at Northwestern University. These episodes are examples of Eastman's persistence in pushing the limits of the acceptable in the highly charged arenas of sexual and civil rights. In addition to analyses of Eastman's music, the essays in Gay Guerrilla provide background on his remarkable life history and the era's social landscape. The book presents an authentic portrait of a notable American artist thatis compelling reading for the general reader as well as scholars interested in twentieth-century American music, American studies, gay rights, and civil rights.BR   Contributors: David Borden, Luciano Chessa, Ryan Dohoney, Kyle Gann, Andrew Hanson-Dvoracek, R. Nemo Hill, Mary Jane Leach, Renée Levine Packer, George E. Lewis, Matthew Mendez, John Patrick Thomas  Renée Levine Packer's book This Life of Sounds: Evenings for New Music inBuffalo received an ASCAP Deems Taylor Award for excellence. Mary Jane Leach is a composer and freelance writer, currently writing music and theatre criticism for the Albany Times-Union.

Julius Eastman enjoyed the admiration of peers such as Morton Feldman, Meredith Monk and Pierre Boulez. Here, highly engaging essays by those who knew Eastman well recall him as a person and assess his brilliance. While there are amusing anecdotes about his more madcap moments . . . the overall message is that he was an artist deserving of significant respect

Outspoken about his own identity as a black queer man...Eastman was ahead of his time. His music is politics by other means, in search of a form, alighting toward a future that could grant him dignity, when he could be something other than an abstraction

A composer of visionary power, a singer with a cavernous bass voice, a collaborator with the diverse likes of Meredith Monk and Pierre Boulez, Eastman had long been a fixture of the New York Music scene....Part of the pleasure of Eastman's rediscovery has been the belated, deserving reinsertion of a black, gay figure into music history