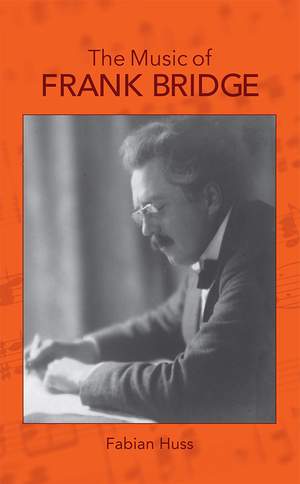 The Music of Frank Bridge

This volume is a crucial addition to scholarship. Being the first 'detailed and long-overdue study of Bridge' it will be of huge interest to serious researchers into his music. Added value here... — MusicWeb International More…

The English composer, violist, and conductor Frank Bridge (1879-1941), a student of Sir Charles Villiers Stanford, was one of the first modernists in British music, developing the most radical and lastingly modern musical languageof his generation. Bridge was also one of the most accomplished British composers of chamber music in the twentieth century. After the lyrical romanticism of the early period, a notable expansion of style can be observed as earlyas 1913, leading eventually to the radical language of the Piano Sonata and Third String Quartet, drawing on influences such as Debussy, Stravinsky and the Second Viennese School composers.However, Bridge became frustrated that his later, more complex music was often ignored in favour of his earlier 'Edwardian' works; this neglect of his mature music contributed to the growing obscurity into which his music and reputation fell in his last years and afterhis death. Symptomatically, Bridge is still often remembered primarily for privately tutoring Benjamin Britten, who later championed his teacher's music and paid homage to him in the 'Variations on a Theme of Frank Bridge' (1937).This book, the first detailed, and long-overdue, study of Bridge's music and its relevant socio-cultural and aesthetic contexts, encourages a more thorough understanding of Bridge's style and development and will appeal to readers with interests in British music, early twentieth-century modernism and post-romanticism as well as genre and style.   FABIAN HUSS is Visiting Fellow at the University of Bristol and has published widely on British music (particularly EJ Moeran), with an emphasis on cultural history, and aesthetic and analytical issues.

This volume is a crucial addition to scholarship. Being the first 'detailed and long-overdue study of Bridge' it will be of huge interest to serious researchers into his music. Added value here is the thoughtful analysis of many works that have been previously ignored or just touched upon by critics. The book will be of great help to all reviewers and popularisers who choose to explore Frank Bridge's music