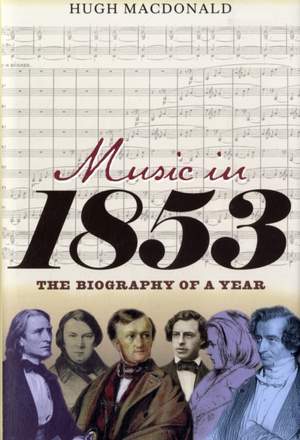 Hugh Macdonald's 'biography of a year' is positively postmodern in the way it dissolves its documentary sources into a smoothly running narrative that relishes and thereby transcends the archaic... — Musical Times More…

Why 1853? For many leading composers this year brought far-reaching changes to their lives: Brahms emerged from obscurity to celebrity, Schumann ceased to be an active composer, and both Berlioz and Wagner became active again after long silences. By limiting the perspective to a single year yet extending it to a group of musicians, their constant interconnections become the central motif: Brahms meets Berlioz and Liszt as well as Schumann; Liszt is a constant link in every chain; Joachim is close to all of them; Wagner is on everyone's mind. No one composer is at the centre of the story, but a network of musicians spreads across the map of Europe from London and Paris to Leipzig and Zurich.  Music in 1853 shows how musicians were now more closely connected than ever before, through the constant exchange of letters and the rapidly expanding railway network. The book links geography and day-to-day events to show how international the European musical scene had become. A larger picture emerges of a shift in musical scenery, from the world of the innocent Romanticism of Berlioz and Schumann to the more potent musical politics of Wagner and of his antidote (as many saw him) Brahms.  HUGH MACDONALD is Avis H. Blewett Professor Emeritus of Music at Washington University, St Louis. He has authored books on Skryabin and Berlioz and has previously published Beethoven's Century: Essays on Composers and Themes with Boydell/URP.

Macdonald writes with great fluency and grace. [...] This is a splendid effort

In Hugh Macdonald's highly readable Music in 1853, musical colossi are bumping into each other on almost every page

This is a book to read and re-read, beautifully bound and printed [...] and if there were such a thing as Gramophone Book of the Year, this would be my first recommendation

[Macdonald's] detailed interweaving of the daily lives of these characters leaves an abiding impression, not just of the endless travel involved in being a working musician, but also of the importance of the railroads: the new arteries of central Europe's increasingly vigorous cultural life

[This] narrative is refreshingly efficient, and connections that have eluded single-subject biographers come to light. Music-lovers of all persuasions are likely to gain something from this well-written, thoroughly researched work