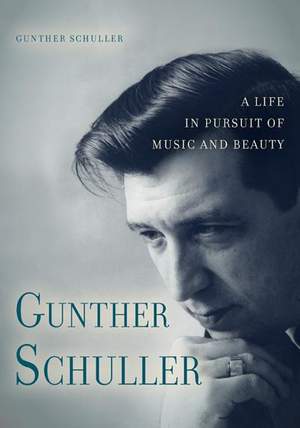 Gunther Schuller: A Life in Pursuit of Music and Beauty

Simultaneously the memoir of a famed composer, conductor, and music educator, and an important historical sourcebook on the American musical scene during the twentieth century and into the twenty-first, the autobiography of Gunther Schuller chronicles the first thirty-five years of this multifaceted and expansive figure's life and work. Schuller began composing music at an early age and joined the Cincinnati Symphony as its principal French horn player at seventeen. Since then he has written for many major orchestras and his work has earned him a MacArthur Foundation "genius" grant and the Pulitzer Prize in 1994 for his large-scale orchestral piece Of Reminiscences and Reflections. Perhaps most famously, Schuller contributed to a new stylistic blend between progressive factions of jazz and classical music, for which he coined the term "Third Stream," and collaborated with John Lewis, the ModernJazz Quartet, and others in the development of this style.  In this exquisitely detailed reflection on his early influences, experiences of good fortune, and powers of curiosity, as well as firsthand recounting of critical cultural and social moments and major movers of the jazz world, Schuller here beautifully and honestly narrates a life lived beyond limits.   Gunther Schuller has been on the faculties of the Manhattan School of Music andYale University; he was, for many years, head of contemporary music activities (succeeding Aaron Copland) and Director of the Tanglewood Music Center, and served as president of the New England Conservatory. He is the author of The Swing Era: The Development of Jazz, 1930-1945; Early Jazz: Its Roots and Musical Development; The Compleat Conductor, and many other books.

An amazing book. . . . Schuller had a phenomenal knack of being in the right place at the right time. . . . An insatiable thirst for knowledge and understanding of all aspects of human life and culture . . . drive the book and the narrative with breathtaking energy. . . . An important document of cultural history

If you'd done a quarter of what Gunther Schuller has done in his lifetime, I'd want to read your memoirs, too. . . . He is the only musician in the world who can claim to have played with Maria Callas, Miles Davis, Ethel Merman, Frank Sinatra, Igor Stravinsky and Arturo Toscanini. . . . Compulsively readable. -- Terry Teachout

The dictatorial behaviour of many conductors [Reiner, Toscanini] is brought into full view, with specific examples. . . . Well produced and reasonably priced. -- Peter Dickinson