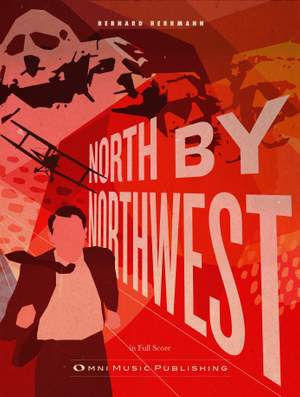 Sixty years on, it is clear Hitchcock's sleek thriller captured the spirit of 1950s America perfectly: urbane modernism, polite professionalism, and the looming threat of the Cold War. The film is a Technicolor marvel; colorful and visually stunning. The hero, played by Cary Grant, performs myriad death-defying feats, from evading a murderous airplane in a cornfield to avoiding capture atop Mount Rushmore. With familiar locales and attractive lead actors, North By Northwest is a feast for the eyes. Bernard Herrmann provided the treat for the audiences' ears.

The studio, MGM, originally wanted "Gershwin-esque" (a la Rhapsody In Blue), American city-music to accompany the opening sequence of a bustling New York. Herrmann felt this was too cliched and instead composed a dazzling, dizzying overture, described by the composer as "a kaleidoscopic orchestral fandango designed to kick off the exciting rout which follows."

The fandango perfectly encapsulates the wild dance between Cary Grant and his pursuers. The score, at times, features furiously shifting meters of 6/8 and 3/4, loud brass punctuations, and Herrmann's propensity for low, moody woodwinds. The love theme stands in contrast. This beautiful melody features a long, lovely tune for oboe and clarinet that allows the score to catch its breath, if only for a moment.

For the first time ever, musicians, music students, conductors - any music lover - can study North By Northwest in this durable, high-quality edition, carefully reproduced and edited from the original handwritten manuscript.