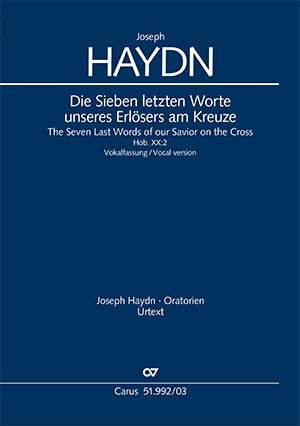 Joseph Haydn’s oratorio Die sieben letzten Worte unseres Erlösers am Kreuze is probably one of the most frequently performed settings of music for Good Friday. Haydn set these Seven Words in a dramatic, extremely gripping emotional style which is utterly compelling. Originally the work was conceived as a purely instrumental composition – as meditative music in seven slow movements with an introduction and concluding movement (“Il Terremoto” – the earthquake) for a Passiontide church service. From the outset, Haydn had composed the themes of the movements with a “vocal spirit” in mind, so when he heard a vocal arrangement of his work in 1794 in Passau with a German singing text – an obvious idea – it inspired him to write his own vocal version. The first performance took place in 1796 in Vienna. With the flourishing of choral societies in the 19th century, this vocal version of the Seven Words became one of the most frequently-performed Passion music settings of all. The critical Urtext edition of the work now published offers a revised musical text reflecting current scholarly standards.