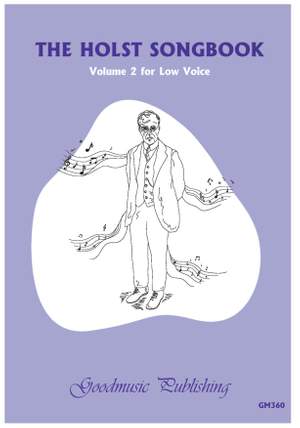 Gustav Holst composed solo songs for voice and piano at various stages of his career, but with an abundance from the late 1890s (towards the end of his student days) into the early 1900s. Richard Capell, writing in The Musical Times in January 1927, mentions that songs by Holst were appearing in the programmes of London recitals early in the 1900s and several early examples were heard in company with the first performances of Vaughan Williams' Songs of Travel and The House of Life in 1904. Only a relatively small number of Holst's songs were published and, of those that were, many have been out of print for some time. The Holst Songbook (in 4 volumes, published in versions for both high and low voice) brings together all the solo songs for the first time and presents a wonderful opportunity for these hitherto undiscovered gems to be performed and appreciated for the first time. And, we hope, recorded too.

Volume 2 includes 13 songs dating from the period 1896 to 1905. By the latter date Holst, born in 1874, would have been about 30 years of age, approaching his maturity as a composer and creating his own distinctive style. Holst's daughter, Imogen, was fairly dismissive of much of her father's early output and refused to use her H numbering sequence to such early works. Nevertheless, as all the songs in Volume 2 have been ascribed an H number, I think that we can safely assume that Imogen approved of them.