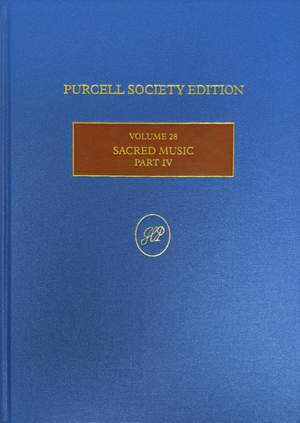 As the penultimate stage in the reordering of the Society’s edition of Purcell’s anthems, the fourteen items in the new Volume 28, which were originally scattered among Volumes 28, 29 and 32, constitute the earlier part of the composer’s output of continuo verse anthems; the volume thus complements Volume 29, which assembles all the later ones. Nine of the works in the new volume span the years between about 1675, well before the composition of any of Purcell’s court odes or most of his instrumental music, and 1679; they therefore track his early development as a composer more comprehensively than any other genre. The first two anthems, Turn thou us, O good Lord and Who hath believed our report, are the work of a prentice hand, though the second of them already displays striking eloquence. The next four, however, Lord who can tell how oft he offendeth, Blessed be the Lord my strength, Let God arise and O Lord our Governor, found immediate professional acceptance, entering the repertoire at Westminster Abbey and the Chapel Royal by the end of 1677. Give sentence with me, O God, O praise the Lord, all ye heathen and the bass solo anthem I will love thee, O Lord followed prior to Purcell’s appointment as Abbey organist in 1680, while the treble solo anthem The Lord is King probably dates from the beginning of his tenure there. The remaining four anthems, Let mine eyes run down with tears, Hear my prayer, O God, O Lord, thou art my God and Out of the deep, all date from between about 1682 and 1685, and each of them can lay claim to be regarded as a masterpiece; Let mine eyes run down in particular, scored for five-part verse group with divided trebles, is outstanding, even within Purcell’s output, for its expressive power and the assurance of its polyphonic writing.