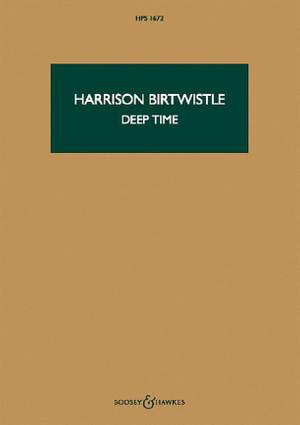 This work received its first performances under the baton of Daniel Barenboim in 2017 in Berlin and London. The 23-minute score, dedicated to the memory of Peter Maxwell Davies, was commissioned by the Berlin Staatskapelle and BBC Proms and, following performances at the Philharmonie and the Konzerthaus, travelled with orchestra and conductor to the Royal Albert Hall. Deep Time resonates with temporal and seismic themes in a metaphorical rather than a literal sense, the composer drawing parallels to the concept of perpetual geological change and the immense spans of deep time embedded in the earth. He refers to the idea of strata of material being blown apart by seismic activity so that rocks of vastly different ages can be viewed adjacent at the present point of time, as he observed when living on the Scottish island of Raasay which sits astride a geological fault line. The new work’s concern with time can see it placed as the third piece in a Birtwistle orchestral triptych following The Triumph of Time and Earth Dances. The Guardian describes the work as “an immensely powerful, sometimes breathtakingly beautiful work… Birtwistle may use an orchestra in which low-pitched instruments – tubas, bass and contrabass clarinets, contrabassoons – are emphasised, but the landscapes that the music traverses are wonderfully varied and coloured. There are pulsing Stravinskyan repetitions, cascades of chattering woodwind, Boulez-like toccatas of tuned percussion and long-limbed solos, led off of by soprano saxophone, which float over transparent webs of strings…one of Birtwistle’s finest orchestral achievements.