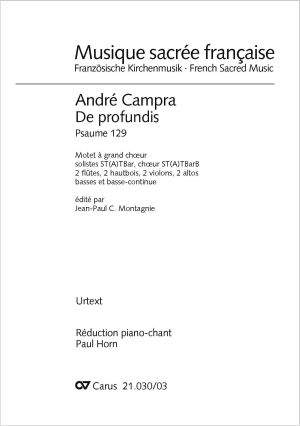 In his roles as Music Director at the Cathedral of Notre Dame in Paris and in the Royal Choir [chapel] of Louis XV, André Campra (1660–1744) composed numerous motets which frequently displayed the influence of contemporary opera. If today Campra is known almost exclusively for his famous Requiem, nevertheless his more than forty motets composed for soli, choir and orchestra are still awaiting discovery. Among these is a setting of Psalm 129, De profundis, published here in a new critical edition after the autograph score. The work was composed in 1723 during the first months of Campra's service to the French king and it proves to be the equal to the compositions of Michel-Richard de Lalande, who during his lifetime shaped and dominated the genre of the "Grand Motet."