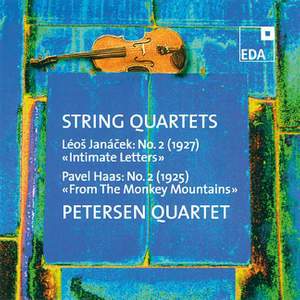 Only three years separate the composition of the quartets by Leoš Janá?ek and Pavel Haas – and it’s hard to imagine two works by mentor and student in the same genre which could be so different from one another. While Janá?ek, an old man by then, declared his love to a 38-year younger woman (one-sided as it may have been) in this work from 1928, completing a work of tumultuous tragedy and nearly desperate melancholy (his second-to-last piece of all), Haas had returned three years prior from an easygoing summer in Affenbergen (near Brno) and created a suite-like work full of imagery and youthful high spirits. He himself wrote the following about it: “Movement dominates this entire carefree composition. From the rhythm of the birdsongs and the rolling landscape, the irregular motion of a horse-drawn carriage on the land, from the warm song of the human heart to the cool and silent flow of the moonshine, the jolly mood of a warm night’s celebration to the pure, innocent laughter of the morning’s sun... motion is abound here, motion which dominates everything. And that’s why I must emphasise that it is not a deliberate or peculiar act in this composition, when I use drums and jazz in the last movement, since this idea is inseparably connected to the work’s original plan, which culminates with rhythm and dynamics in the final movement.” Haas later withdrew the version with drums, but only because he felt he was drawing public criticism for it. Our recording is true to the original. Both composers were bards of Brno, the city which was always closer to Vienna than Prague was and quickly became much more Czech than the multicultural capital ever would. Without Janá?ek’s untiring work during the Habsburg era in the music scene of his hometown (which often went neglected in favour of Prague), the city would never have become the Moravian music metropolis which it is today. There (and at his summer retreat in Luha?ovice), Janá?ek ecstatically wrote virtually all of his major works in the last ten years of his life. From the completion of his examinations to his deportation to Terezín in 1941, Pavel Haas worked as a freelance composer, theatre musician, teacher and author of numerous film musicals. He took a great interest in the media of his time, including radio, to which he dedicated a “Radio Overture” of his own. He died in the gas chambers of Auschwitz in October, 1944.