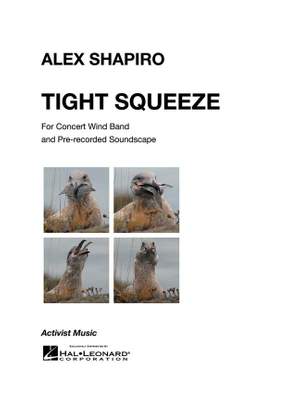 From the acclaimed composer of Paper Cut, AlexªShapiro, this unique, high-energy work could beªdescribed by the following: imagine Arnold Schoenberg,ªHenry Mancini, and Charlie Parker walking into aªdance club in Havana,and staying for three minutes. Tight Squeeze ventures into new territory as it exploresªchromaticism and syncopation against a prerecordedªpercussion groove. The result is the repertoire's first electroacousticªtwelve-tonetechno Latin bebop band piece! Okay, maybe Schoenbergªdid all that first, but it never sounded quite like this!

To perform the piece, you'll need an audio system capable of playing the prerecorded audio tracks from a laptopcomputer via a small digital audio interface connected to an audio mixer. Download information is provided in the printed piece. Dur: 3:15