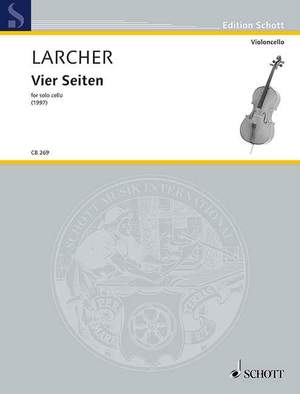 Vier Seiten for violoncello is an attempt to present an event that in reality takes about two seconds in extreme slow motion, thus making even the micromovements visible or audible beyond the straight line of motion.When I composed the piece, the fatal accident of Ayrton Senna came to my mind again and again – an accident which was shown on TV in slow motion again and again until it became unbearable. The fast motion of the car immediately before the crash into a concrete wall, a motion which was no longer purposeful but out of control and which had the car pulled to and fro and from side to side, was followed by that crash. In this extreme slow motion, it is no longer shown as a crash but as the fast telescoping of carbon fibre, metal and human body parts.After this crash, as a postlude so to speak, everything suddenly slowed down, tyres and automotive particles floating in the air, the torso of the vehicle swinging until the motion stopped. It was not until this moment that I realized that the whole presentation of the incident had been accompanied by paralyzing silence.- Thomas Larcher