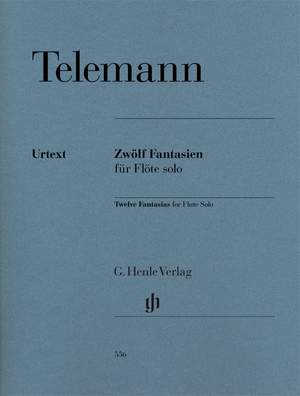 Georg Philipp Telemann 's 12 Fantasias for solo Flute. Aside from the Partita in A minor by Johann Sebastian Bach (HN457) and the Sonata in A minor by his son Carl Philipp Emanuel (HN555), it was also mainly Telemann ’s 12 Fantasias that enriched the solo Flute repertoire in the first half of the 18th century. Telemann ’s cycle evidently had a great influence on the flautist’s world. The composer had his Fantasias published in 1727 (he might even have engraved the edition himself). The work was soon considered to be exemplary and caught on. This Henle Urtext edition is based on Telemann ’s print, which has been reproduced as a facsimile in the edition. The Flute expert Rachel Brown has provided a commentary with details regarding performance practice.