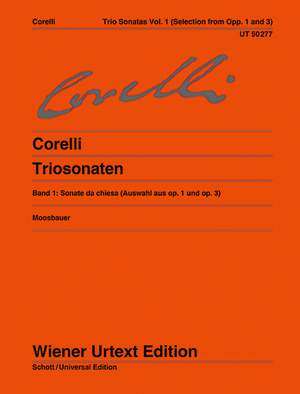 Edited from the sources

Very few works in music history have been associated with the phrase 'epoch-making' yet Arcangelo Corelli's Trio Sonatas are among them. In 1681 and 1685, with the composition of Sonate da chiesa Op. 1 and Sonate da camera Op. 2, Corelli laid the foundation for a genre which was to be the chamber music format for almost 100 years. It was only in 1781 that it was superseded by Joseph Haydn's String Quartets Op. 33, which were also highly significant to the era. From a historical point of view, the string quartet can be viewed as a 'child' of the trio sonata; thus, As a result, Wiener Urtext Edition have published a selection of 12 of a total of 48 trio sonatas due to the 300th anniversary of the composer's death. Volume 1 contains six sonatas of the Da Chiesa model, Volume 2 six pieces of the Da Camera type. This new edition was based on original editions, the first Italian reprints as well as the Rogers Amsterdam edition. In addition to parts for the melodic instruments, the new edition also contains a continuo score with realised, easily playable basso continuo. This edition is perfectly suitable as an introduction into chamber music.