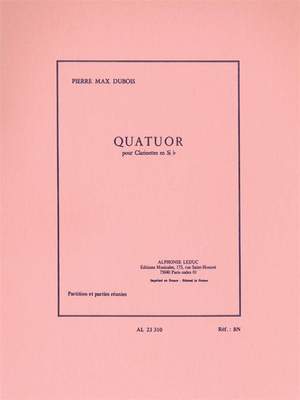 During the whole piece, the Clarinets complete each other’s part on this fast work. The first part has a repetitive theme with some variations while the second one seems to be playing more on the aspects of the low and high ranges. The “Pastorale” section is slower and slightly less cheerful. The piece ends on the “Musette” which brings back some energybefore the end.

This piece would be perfect to play during a concert or a recital.

Pierre Max Dubois (1930-1995) was a French composer who was awarded the Prix de Rome in 1955. Mainly composing classical music, his works are mainly for woodwinds. He is one of the founder of the Les Six and which included his professor, Darius Milhaud.